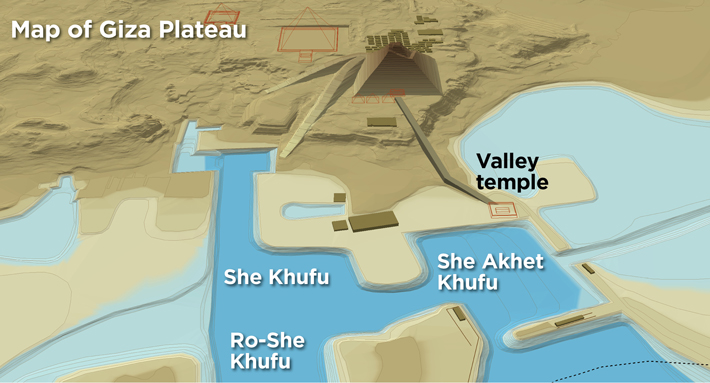 In addition to providing unique insight into the experience of workers who helped build Khufu’s (r. ca. 2633–2605 B.C.) Great Pyramid, the papyri discovered at Wadi el-Jarf offer revealing clues to the layout of the Giza Plateau and its maritime infrastructure during the period of the pyramid’s construction. In the papyri, when Inspector Merer and his men are described approaching the plateau with a boatful of limestone blocks, they pass through the Ro-She Khufu (Mouth of the Lake of Khufu) into either the She Khufu (Lake of Khufu) or the She Akhet Khufu (Lake of the Horizon of Khufu). According to Egyptologist Mark Lehner, director of Ancient Egypt Research Associates, who has led excavations at the Giza Plateau for three decades, this supports scholars’ theory that the ancient Egyptians built a network of artificial basins that allowed heavily laden boats to deposit their cargo at the plateau’s edge, facilitating the delivery of materials necessary to construct the pyramid.

What appears to be the outline of one of these basins— likely the She Akhet Khufu—was detected through test excavations carried out in the late 1980s and early 1990s. The basin’s western edge seems to have been the site of Khufu’s valley temple, which had a massive limestone foundation covered with black basalt slabs. Sections of colossal walls forming the other three sides of the basin, also composed of basalt on limestone foundations, have been located as well. In all, the basin measured around a quarter of a mile by a third of a mile. Based on cores taken from its center, Lehner believes the basin was dredged to a depth of between 26 and 33 feet, allowing ample clearance for boats such as that captained by Inspector Merer. “The correspondence between archaeology and the texts from Wadi el-Jarf is phenomenal,” says Lehner.