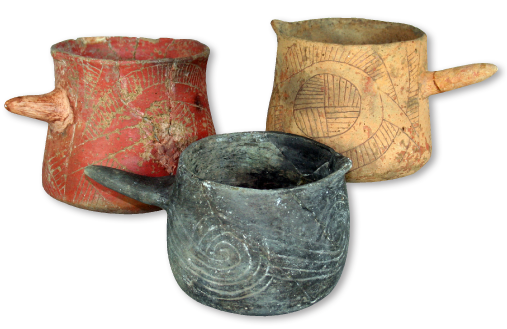 Coffee had not yet arrived in Europe from southern Arabia when Spanish explorers came to the southeastern United States and discovered that Native Americans were already drinking a highly caffeinated beverage. Called Black Drink, it was made from the toasted leaves of two species of llex (holly) and was used by many tribes as part of purification rituals that also included fasting and vomiting. According to anthropologist Patricia Crown of the University of New Mexico, these rituals were widely practiced, especially by men, before important activities such as religious events, political councils, ball games, and war parties.

By analyzing residue left in the beaker vessels dating to as early as A.D. 1050 from which Black Drink was consumed, Crown’s team has shown that the local population of Cahokia, the largest pre-Columbian site north of Mexico, had in fact been imbibing the potent potable 500 years earlier than previously thought. Since the brew’s main ingredient, Ilex vomitoria and possibly Ilex cassine (also known as Yaupon and Dahoon) are not found locally, Crown also believes that the drink’s presence at Cahokia indicates that the plants were brought in from hundreds of miles to the south, making Black Drink an imported luxury. Because Cahokia was the most influential center in the Eastern Woodlands, which spanned the area between the Mississippi River and the Atlantic Ocean, including the Great Lakes, the rituals practiced there, including the consumption of Black Drink, deeply impacted those of other groups in the region.