The Divine King and His Queen 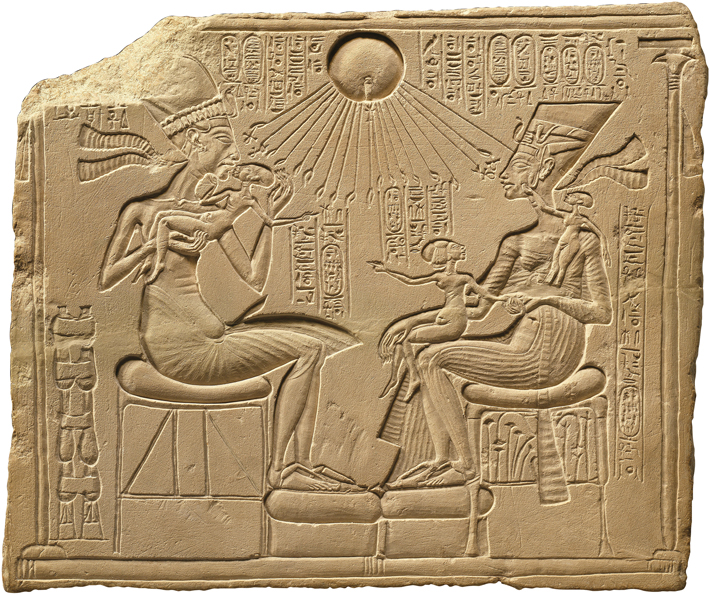 The 17-year reign of the pharaoh crowned as Amenhotep IV was one of the most revolutionary periods in Egyptian history. After the prosperous 39-year reign of his father, Amenhotep III, the pharaoh inherited a peaceful kingdom, which, says Egyptologist Arlette David of the Hebrew University of Jerusalem, was a perfect setting for the blossoming of philosophical ideas—conditions the new pharaoh took full advantage of. Amenhotep IV changed his name to Akhenaten five years into his reign to reflect his rejection of the main gods of the established pantheon and his promotion in their place of Aten, the god of light, as Egypt’s principal god. He also moved the royal capital 250 miles north from Thebes and built a city there that he called Akhetaten to rival his father’s Dazzling Aten. Several reliefs show Akhenaten and his Great Royal Wife, Nefertiti, with their daughters. But a newly studied relief from a monument at Karnak dating to around 1350 B.C.—just before Akhenaten turned the Egyptian world upside down—provides fascinating insight into the mind of the pharaoh.

The sandstone talatat, Akhenaten’s standardized building block, depicts the pharaoh and Nefertiti, assisted by male servants, preparing for their day. They are shown applying makeup, having their nails cut, purifying themselves, and dressing. “It looks like a very intimate household scene,” says David, but she believes that it actually shows them appropriating a well-known daily ritual described in later papyrus documents that was performed for the cult statue in the most sacred chamber of the temple of the creator god Amun-Ra at Karnak. Through the imagery on the relief, explains David, the pharaoh proclaims himself the divine personification of his personal god, Aten. “Akhenaten didn’t build everything from scratch,” she says. “His decision to throw away the Theban gods was extreme and shocking, but he used already-existing rituals, images, and texts, and recycled them to adapt to his new vision of kingship in which he was the center of everything and alone under his god.”