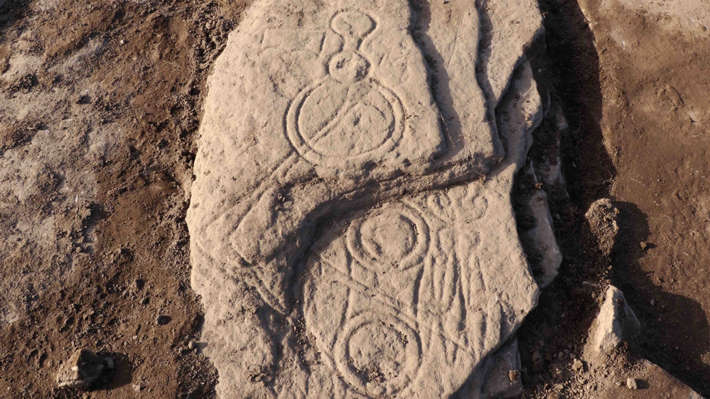 A rare carved Pictish stone was unearthed near the village of Aberlemno in eastern Scotland. The 5.5-foot-tall monument, which dates to the fifth or sixth century A.D., is covered with geometric symbols such as disks, ovals, and crescents. “The Picts appear to have created a communication system that is unique and as yet undecipherable,” says University of Aberdeen archaeologist Gordon Noble. “Our best bet is that this was a form of identity marking, perhaps communicating a person’s name or status.” The stone was reused as a paving slab in an eleventh- or twelfth-century structure that was built directly atop an ancient Pictish settlement.

The region of Angus, where the discovery was made, was an important landscape for the Picts in the early Middle Ages, and several other carved monoliths have been recovered there. The pivotal Battle of Nechtansmere is believed to have been fought nearby in A.D. 685. During the battle, the Pictish king Bridei Mac Bili III defeated an army of invading Anglo-Saxons. His victory helped pave the way for the creation of the Kingdom of Scotland some 160 years later.