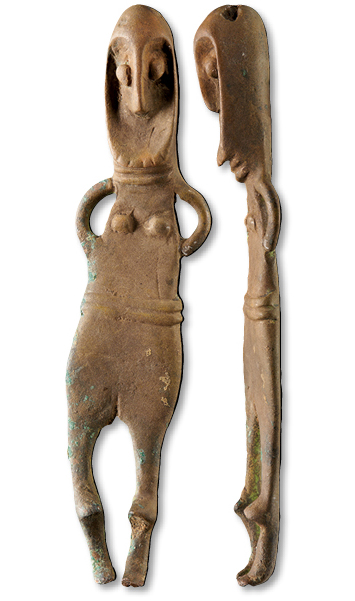 Across the world there are places to which people return time and again, sometimes over centuries, and leave behind tokens that speak to the purpose of their trips. The visitors may intend to honor another person, perhaps by placing flowers at a war memorial. Or these tokens may celebrate a long journey—visitors to Rome’s Trevi Fountain often throw a coin over their shoulder to ensure they’ll return to the Eternal City. This diminutive figurine of a woman recently discovered alongside a prehistoric trail in Germany’s Tollense Valley may have served Bronze Age people in both of these ways. 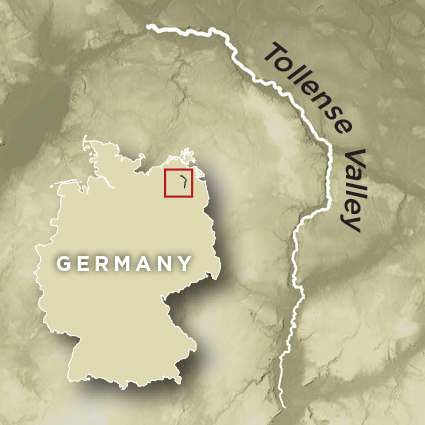 Thirty years ago, some scholars suggested that this type of bronze figurine—of which 13 have been found in southern Scandinavia and northeastern Germany—was part of a Bronze Age system of weights. Archaeologist Thomas Terberger of the University of Göttingen disagrees. “The small number and unusual form of these figurines do not support the interpretation that they served as weights,” he says. Other archaeologists have suggested that these figurines were meant to depict a goddess. But that, too, is unlikely, Terberger says. “The rarity and distribution of these figurines over a relatively small area speaks against their interpretation as a widely known Bronze Age Nordic goddess,” he says.

Instead, Terberger believes that the figurine was intended to mark the lengthy trackway along which it was found, which was in use for more than 1,000 years. “The considerable investment of labor in the trackway suggests that it was an important route for communication and for trade, especially in tin and copper,” Terberger says. “The Tollense Valley might have been a shortcut for people traveling to the southern Baltic coast.” It’s also possible that the person who left this figurine behind was commemorating a traumatic episode in the valley’s history about 600 years earlier—a violent conflict that left at least 150 people dead. “This was an unprecedented event of historic scale, and oral history and folk memory were of great relevance in the Bronze Age,” Terberger says. “The valley could have been an important place to remember.”