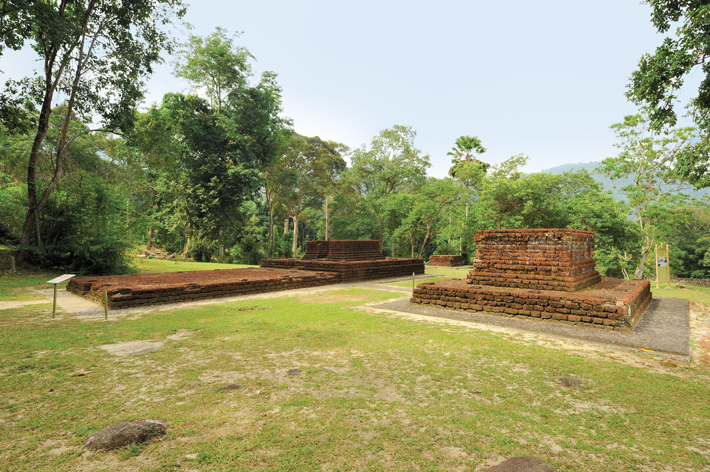 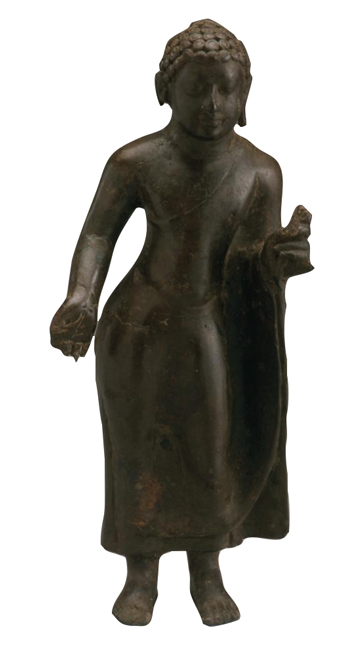 Malaysia’s Lembah Bujang, or Bujang Valley, is one of the earliest archaeologically documented crossroads for trade goods and religious ideas in Southeast Asia. The valley, which is located south of Mount Jerai in Kedah State near the coast of the Strait of Malacca, has been the subject of scholarly interest since the early nineteenth century. At that time, colonial officials with the East India Company uncovered evidence of a civilization bearing the influence of the Indian subcontinent, including traces of religious buildings and objects with motifs associated with Hinduism and Buddhism. Multiple excavations have since unearthed dozens of archaeological sites that suggest the region was home to a port and trade center where merchants from around Southeast Asia and beyond, including what is now the Arabian Peninsula, India, the Malay Archipelago, and China engaged in commerce and cultural exchange. Archaeologist John Miksic of the National University of Singapore says that, beginning in the seventh century A.D., the region may have become part of Srivijaya, a powerful empire based on the island of Sumatra to the south that wielded extensive influence over thousands of miles of coastline straddling the Strait of Malacca. “Most people assume that Srivijaya became the Bujang Valley’s overlord,” says Miksic. “But some others think Bujang entered into a trading alliance with them, something akin to the Hanseatic League of ports in the medieval period.” The Bujang Valley, Miksic says, was probably a Buddhist kingdom until around 1025, when the Hindu Chola Empire of south India conquered the region, as well as other ports on the Strait of Malacca. 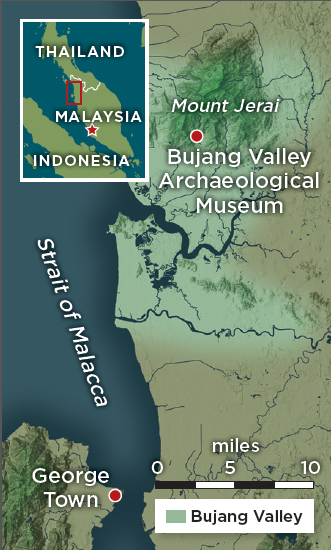 More than 30 temple ruin sites dot the roughly 90-square-mile Bujang Valley, clustered mainly along its waterways. Along the Batu River, archaeologists have discovered remnants of a possible jetty dating to as early as the second century A.D., as well as evidence of iron smelting operations. The Bujang Valley Archaeological Museum in the town of Merbok exhibits artifacts uncovered at sites around the Bujang Valley and offers guided tours of temples. The museum was constructed next to Site 8, also known as Candi Bukit Batu Pahat, a granite temple that was first excavated in the 1930s by English archaeologists H.G. and Dorothy Quaritch Wales. At the temple, which is believed to have been Hindu, the archaeologists discovered two nine-chambered stone reliquaries, as well as gold foil pressed with the image of Nandi, a bull figure associated with the god Shiva. Along the Bujang River, Dorothy Quaritch Wales excavated a Buddhist temple and a bronze Buddha statuette that likely date to the seventh century A.D.

The island of Penang, which lies off the west coast of the Malay Peninsula, and its capital city, George Town, continue the Bujang Valley’s tradition of multiculturalism. Take a tour of the center of George Town, which is filled with preserved colonial architecture, then hit the Chulia Street Night Market to sample cuisine from the city’s thriving Malay, Indian, Thai, and Chinese populations. 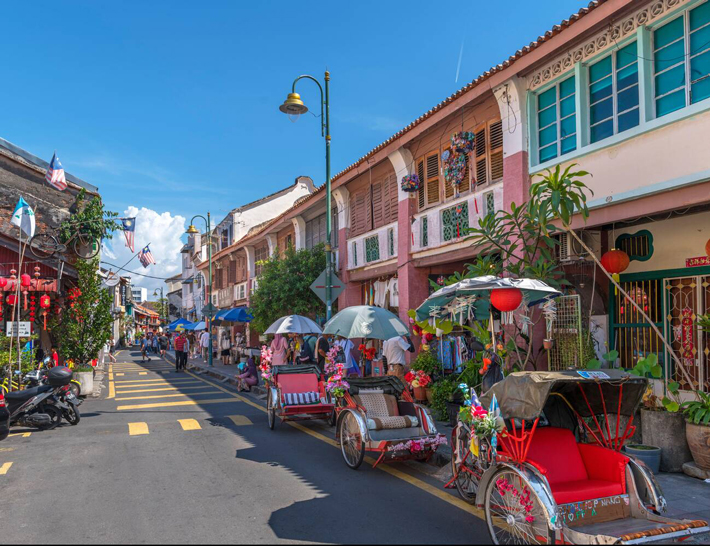 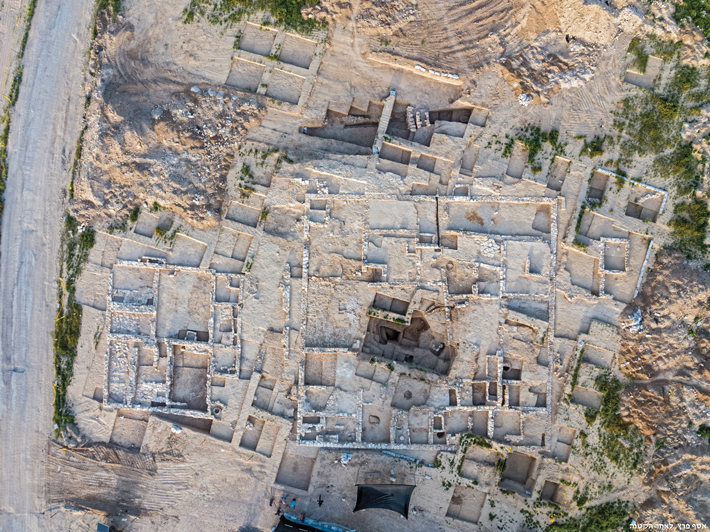 Construction in the town of Rahat in Israel’s Negev Desert has revealed evidence of the effects of Islam in the region between the seventh and ninth centuries A.D. Researchers discovered multiple buildings dating to the Umayyad (A.D. 661–750) and Abbasid (A.D. 750–1258) periods, including a mosque dating to the seventh or eighth century A.D. Roughly 400 yards away, the team discovered the ruins of a palatial Islamic-style building thought to have belonged to a local ruler, featuring walls decorated with frescoes and stone hallways arranged around a central courtyard. Beneath the courtyard, the team unearthed a 10-foot-deep, rock-hewn cistern system.

According to archaeologist Noe David Michael of the Israel Antiquities Authority, the building is similar to some Umayyad- and Abbasid-era structures found in Jordan, but is the first of its kind to have been uncovered in the Negev Desert. There appears to have been an extended period of coexistence between Christians and Muslims in the region. “Christian monasteries and churches were in use in some places until the ninth century,” says Michael. “It’s possible that the mosque we uncovered in Rahat was visited at the same time as Christian places of worship nearby.” 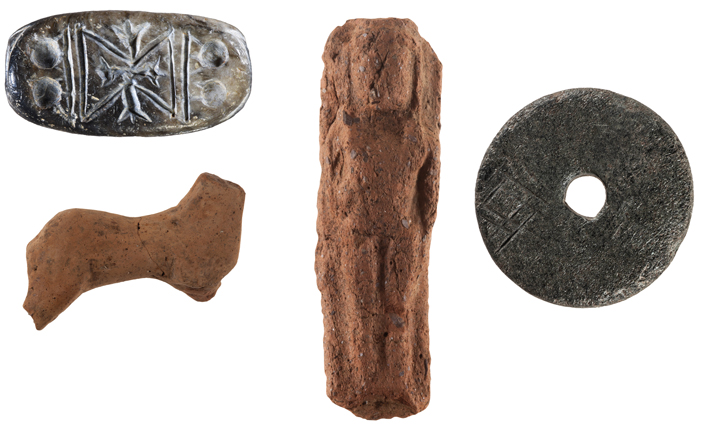 In the Anavlochos mountain range in eastern Crete, archaeologists have found hundreds of ancient terracotta fragments, mostly from female figurines, that were left as votive offerings in natural rock cavities in the seventh century B.C. Within one of these cavities was a more peculiar collection of well-worn objects, including a terracotta plaque of a woman and a steatite bead that likely both date to the eighth century B.C., as well as a seventh-century B.C. terracotta horse figurine. The cavity also contained a three-sided Minoan sealstone dating to between 1850 and 1700 B.C.—at least 1,000 years earlier than the other items. “The only thing these objects have in common is that they were already antiques when they were deposited in this cavity,” says archaeologist Florence Gaignerot-Driessen of the University of Cincinnati. “The fact that they were curated objects is clearly the reason why they were precious enough to be left as offerings.” 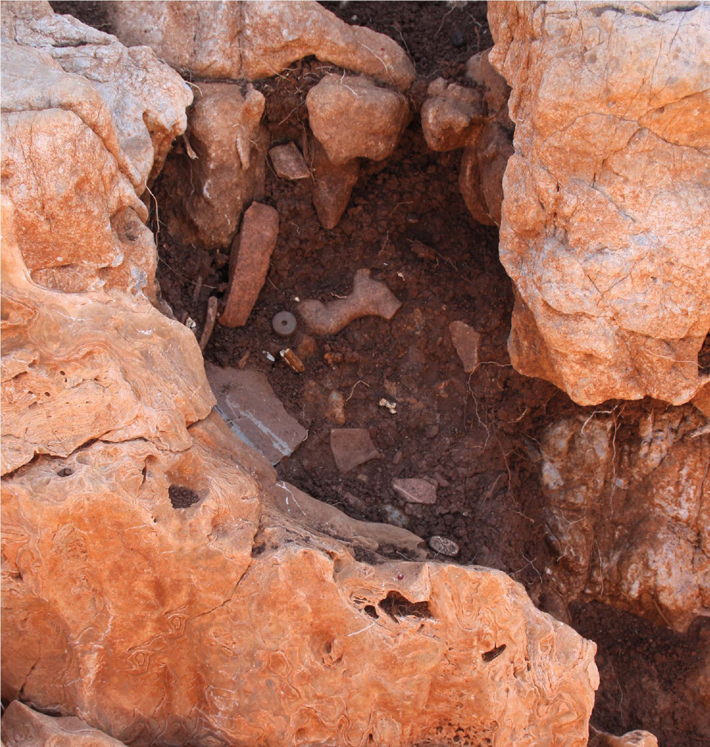 Homer’s Iliad and Odyssey mention similar collections of valuable curated objects, called keimelia, that were accumulated as gifts, heirlooms, and spoils of war. While studying the appearances of keimelia in these texts, Gaignerot-Driessen realized that they could have functioned as stand-ins for a missing person, either living or dead. She proposes that the four objects in the Anavlochos cavity might similarly have been intended to represent missing people by the individuals who placed them there. “This interpretation would change the way we perceive votive offerings,” Gaignerot-Driessen says. “They might represent the person offering the object, or someone they have in mind, and not the recipient, which would have been a deity.”

Archaeologists investigating a 2,000-year-old fortress in the Zagros Mountains of Iraqi Kurdistan believe it may be a lost city. The fortress of Rabana-Merquly stretches across some 2.5 miles of steep terrain overlooking a major tributary of the Lower Zab River. It was located on the southeastern frontier of the vassal kingdom of Adiabene, within the dominion of the Parthian Empire (247 B.C.–A.D. 224), which controlled territory from eastern Turkey to western Pakistan. According to Michael Brown, an archaeologist at Heidelberg University, the fortress was built at an intersection between the lowlands, where state authority was strong, and the highlands, which were home to restive pastoralist tribal groups. “It’s situated there to allow Adiabene to exert some influence over the highland domain,” Brown says.

Rock reliefs carved into the cliff face next to each of the complex’s two gated entrances portray a nearly life-size individual who is identifiable as a Parthian-era ruler by his ceremonial headgear: a dome-shaped hat with a diadem attached to it. Brown says this figure must be a king of Adiabene based on the fortress’ location and the similarity of his attire to that of a statue in the city of Hatra, some 140 miles to the west, which is known to depict an Adiabenean king. The researchers suggest that the fortress was likely the royal city of Natounia, which is known from a handful of coins minted in the first half of the first century B.C., some of which say the city was located “on the Kapros,” the ancient name for the Lower Zab River. “Based on what we’ve got at the moment,” Brown says, “this is the best candidate because we’ve got these big pictures of kings next to our front doors.” If the fortress is indeed Natounia, then the reliefs likely depict its founder, Natounissar, or an immediate descendant. To see a photo of a section of the fortress' perimeter wall, click here. 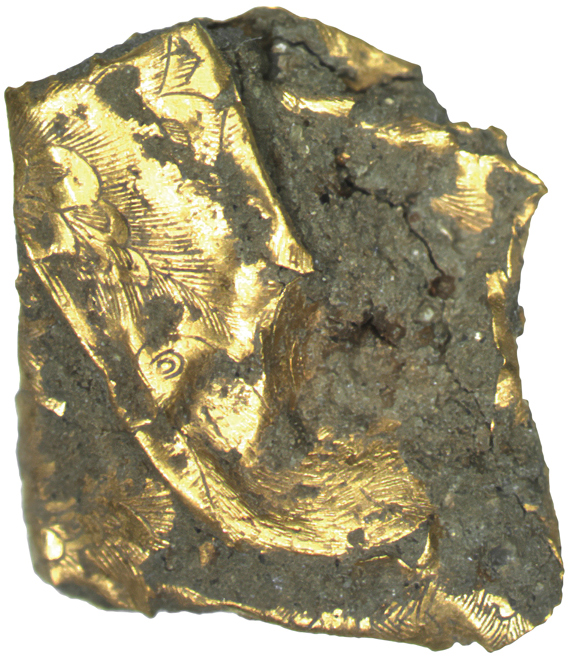 Two separate pieces of a delicate artifact about the size of a small paperclip that was first discovered at the site of a Silla Dynasty (57 B.C.–A.D. 935) royal palace in the South Korean city of Gyeongju in 2016 have now been conserved and reunited. The complete object was made of one one-hundredth of an ounce of 99.9 percent pure gold. It measures 1.4 inches by 0.5 inches and is thinner than a piece of paper. On this microscopic canvas, eighth-century A.D. Silla artisans carved lines thinner than a strand of hair to portray spectacularly detailed flowers seen from above to accentuate their fully bloomed petals. Amid the flowers is a pair of symmetrical birds facing each other.

The two pieces of the artifact were found about 65 feet from each other, both crumpled into tiny balls. It was only when researchers unfolded and flattened and then examined them under a microscope that they realized the fragments belonged to a single object. The artifact’s purpose remains unknown. To see a detail of a finely engraved flower on the artifact, click here.