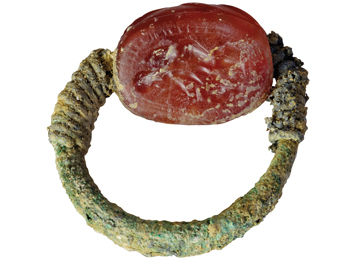 Researchers from the collaborative IMPERO project, which traces the movement of people along the Ombrone River in Tuscany, have unearthed a rare Etruscan grave that had remained undisturbed for 2,400 years. The discovery was made near the site of Podere Cannicci, which was an agricultural village and rural sanctuary in the late Etruscan and Roman Republican periods. The circular tomb, which measures five feet in diameter, was cut into a hillside and located just a foot beneath the surface.

Although the Romans took control of the area around 294 B.C., the second-century B.C. grave is evidence that local inhabitants retained their Etruscan identity more than a century later. The burial included urns that held the cremated remains of two people who were interred with a full assemblage of ceramic vessels that represent a typical Etruscan funerary banquet. Other grave goods included gold earrings, bronze rings, and iron strigils, tools used to scrape the skin clean. The urn holding one individual, perhaps the patriarch of a wealthy local family, also contained a crown fashioned from gold-covered bronze olive leaves and pins. “The decoration pattern of the crown recalls these people’s engagement with agriculture, which was most likely their primary source of wealth,” says University at Buffalo archaeologist Alessandro Sebastiani. Researchers believe the second urn may have held the remains of the patriarch’s son.