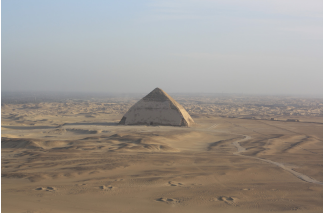 When rain falls in a river valley, overflow from the river forms channels that spread out across the landscape. Even when rivers dry out, the branching channels persist, having carved geometric patterns known as fractals. Fractals have a self-similar nature, meaning that a glimpse from above at a small part of the valley network will appear similar in form to the complete network, just as a twig shows the same basic form as a whole tree.

German scientists are now using these fractals, or rather their absence, to identify landscapes altered by humans. Take the necropolis of Dashur, a 4,600-year-old site 20 miles south of Cairo, where King Sneferu erected pyramids and temples. Surveys around Dashur show that natural fractal patterns appear regularly—except within a two-and-a-half-square-mile section around the complex.

Arne Ramisch, a geographer at the Free University of Berlin, says the fractal-free region might have been used for transporting construction materials more easily, creating a more monumental appearance, or extensive quarrying. “Excavations from our archaeological colleagues revealed that in one of the many potentially man-made landforms a harbor was located,” Ramisch adds. “And this, in the middle of the desert.”