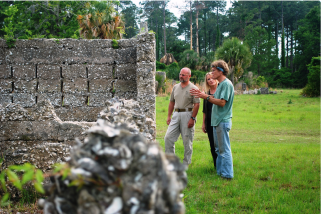 Just 11 miles long and three miles wide, Georgia’s Sapelo Island is a unique cultural destination with a long history. The barrier island’s first known residents were the Guale Indians, who occupied it on and off for more than 3,000 years. In the sixteenth century, Spanish missions and settlements sprang up, and after that, British and French settlers moved in. The nineteenth century brought the island’s plantation era and the 1819 establishment of Chocolate Plantation, built by Edward Swarbeck, a Danish merchant who traded in cotton and other commodities, as well as slaves. The remains of the once-prosperous cotton and sugar plantation are, today, one of the island’s great draws for tourists, according to Bryan Tucker, Georgia’s state archaeologist. The ruins are particularly interesting for their building material, Tucker says—a compound known as “tabby,” a Spanish recipe adapted for use in the southeastern United States.

The site
Don’t let the name fool you: No chocolate was grown at Chocolate Plantation. Its name comes from a nearby Guale village named Chucalate. Today, the plantation site consists of more than a dozen structures made of tabby, a mixture of lime, burned oyster shells, sand, and water. The labor-intensive construction process began by mining shells from midden deposits at nearby Native American sites. In addition to the large two-story plantation house and several outbuildings, the site also has nine buildings that were once slave quarters. These buildings typically had two floors, central chimneys, and finished tabby floors. They suggest that the resident slave community consisted of at least 18 households and between 70 and 100 individuals. Visitors can also check out a restored livestock barn and, for a taste of more modern history, a house purchased from Sears that was assembled on-site from prefabricated parts sometime after 1929.

While you’re there
Sapelo Island is easily accessible by ferry from the Georgia mainland. If, after seeing Chocolate Plantation, you can’t get enough tabby, get a large group of friends together and rent out the Reynolds Mansion, a nineteenth-century estate house partially made of the material. You can also take in the complex of three large 4,000-year-old rings of oyster shells built up by the Guale Indians (perhaps intentionally, but most likely accumulated around villages), as well as the island’s beautifully restored candy-striped lighthouse, originally built in 1820. And finally, Sapelo Island is a home to Gullah culture, African-American communities that have retained some of their African cultural heritage. People in these communities, such as Hog Hammock, are descended from the area’s slaves and still speak a creole language called Gullah, or Geechee. Visiting their communities is a cultural experience like no other.