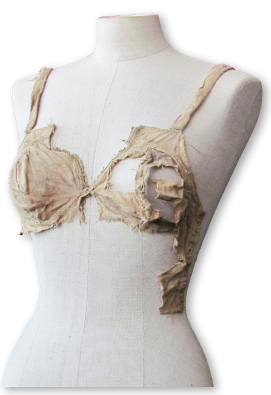 When archaeologists pulled up the floorboards during extensive restoration work at Lengberg Castle in Austria, they found a space filled with dry organic material, including branches and straw, processed wood, leather, shoes, yarn, rope, and more than 2,700 textile fragments. Among the textiles were 17 linen shirts, a complete pair and a fragment of men’s underwear, and four lace-decorated linen bras—which push back the earliest date for this type of women’s undergarment more than 500 years. Using both their archaeological context—the fill layer was likely created during a fifteenth-century renovation of the castle—and radiocarbon analysis of fibers from two of the bras, Beatrix Nutz of the University of Innsbruck dated the garments to between A.D. 1390 and 1485. There are numerous medieval written sources that describe bras as “breastbags,” but until this discovery no one had any idea what these garments looked like. According to Nutz, we also know from contemporary sources that women likely made the garments themselves and did not rely on male tailors. The discovery will enable archaeologists and clothing historians to learn more about tailoring by women.