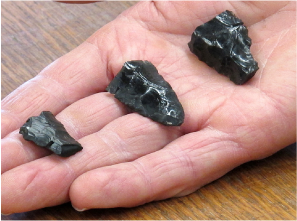 In 2008, archaeologists working at Paisley Caves in central Oregon presented evidence, in the form of coprolites, or fossilized feces, of human occupation in the Americas dating back more than 14,000 years. That’s 1,000 years before the emergence of the Clovis culture, the previously agreed-upon first Americans. Critics discounted the findings because no tools had been found with the coprolites. They asserted that human DNA found on the feces might have washed down onto the droppings over time.

This summer the Paisley Caves team presented new evidence from the cave, including stone tools and radiocarbon dates for them and the coprolites—all as many as 13,200 years old. The Paisley Caves tools belong to the so-called Western Stemmed tradition, and are markedly different from Clovis tools, which are best exemplified by their fluted, Christmas tree–shaped projectile points. Loren Davis, an archaeologist at Oregon State University and part of the Paisley Caves team, says that Clovis points were made from large stone cores, while the Western Stemmed tools were fashioned from stone fragments.

Davis says the findings indicate that another population was here at the same time, or possibly before, Clovis, requiring a new model for the peopling of the Americas. “It can’t be a straight-line evolutionary model where everything descends from Clovis,” he explains. “Now the scene early on is very complicated.”