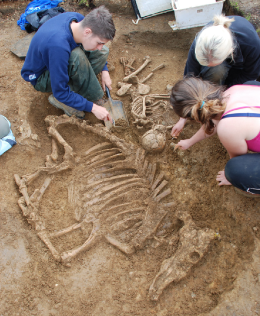 In Oakington, England, a team of archaeologists led by Duncan Sayer of the University of Central Lancashire has excavated a late-fifth-century A.D. Anglo-Saxon grave containing the remains of a wealthy woman and a cow. The grave is the first of its kind in Europe. “It matches the female role in Anglo-Saxon society,” says Sayer. “The cow was much more a symbol of economic and domestic power.”