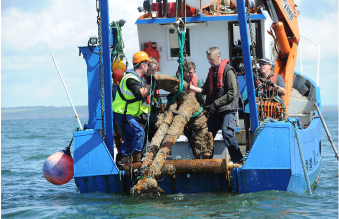 After 14 months of planning, a crew has recovered two iron anchors from the wreck of a German ship that, in 1916, attempted to deliver arms to Irish Republicans. The Aud carried one million rounds of ammunition and 20,000 arms for use in the Republicans’ Easter Rising to free Ireland from British rule. When the Aud mistakenly landed more than 60 miles south of its intended destination, the British navy seized the ship. After being caught, the German captain chose to scuttle the boat off the coast of County Cork.

“Very little of the Aud actually survives, as it was depth-charged and used for target practice a number of times in the past,” says archaeologist Laurence Dunne, who helped lead the recovery effort. All that remains intact besides the anchors—one of which weighs half a ton, while the other is just less than two tons—is a section of the bow and a boiler. Dunne estimates it will take three to four years to complete conservation work on the anchors.