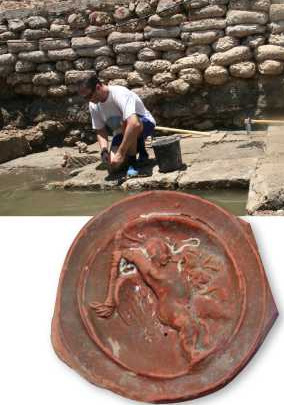 A 2,300-year-old harbor has been uncovered off the coast of the Israeli city of Acre. An Israel Antiquities Authority (IAA) and University of Rhode the only one in a protected natural bay.

“Recently, a find was uncovered that suggests we are excavating part of [Acre’s] military port,” says Kobi Sharvit, director of the IAA’s Marine Archaeology Unit. “We know the pharaoh Ptolemy Philadelphus built a harbor for his fleet at this time. Usually military ships were kept out of the water in ‘shipshades’ like what we found here.” The size and design of the structure suits warships from that period. Large mooring stones, pottery vessels, and metallic objects, many of military function, were also found. Initial examination reveals the items originated across the eastern Mediterranean, including at Aegean Sea islands such as Knidos, Rhodes, and Kos. Sharvit’s team will next attempt to determine when the harbor was destroyed.