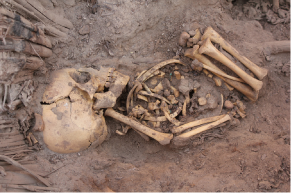 The ancient Peruvian site of Pachacamac is known to have been an important pilgrimage destination for sick travelers seeking cures during the Inca period of the fifteenth and sixteenth centuries. But the site had been occupied since as early as A.D. 200. Between roughly A.D. 900 and the beginning of the Inca period, the Ychsma culture inhabited Pachacamac. Archaeologists know primarily about Ychsma rulers, who built pyramidal palaces filled with simple, secular items related to weaving and animal husbandry. When a local lord died, the members of his household would be entombed in his palace, and his successor would build a new pyramid nearby.

This spring archaeologists discovered a massive tomb at Pachacamac. The oval-shaped structure contains the remains of 36 adults and 43 children, all buried in the fetal position. Around the perimeter of the tomb’s reed roof were the remains of a dozen infants with their heads pointed toward the center of the 63-foot-long burial chamber below. Researchers estimate the tomb dates to about a.d. 1000 based on the style of pottery accompanying the burials. Other grave goods include gold and copper bracelets, wooden masks, and canine remains.

Peter Eeckhout, an archaeologist at the Université libre de Bruxelles in Belgium, hopes the new find will illuminate the “social organization of the common people, which is, in our opinion, reflected in their burial practices.” To that end, he is attempting to discern if the infants atop the tomb were sacrificed or if they died of natural causes. Further, dating of the burials found in the chamber will determine whether the structure was a collective tomb reopened over successive generations for new burials or if all the bodies were entombed at the same time.