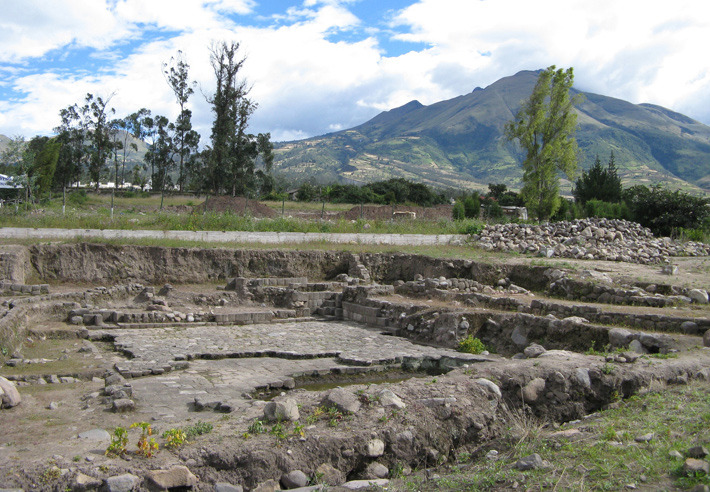 Tamara Bray of Wayne State University walks through a municipal lot in a suburb of the colonial city of Ibarra, in the Andean highlands of northern Ecuador. At 7,550 feet on the northern slope of Imbabura Volcano, the equatorial sun has an intensity that burns through the occasional cool breeze. Chickens peck in the dirt and we can hear children playing at a school nearby. As we walk through the lot, which is now an archaeological site called Inca-Caranqui, Bray explains that the local people knew this was an ancient settlement long before the first archaeological surveys in the late 1990s. Just across the street stand two walls—one 130 feet long and the other 165—that were built by the Inca. One wall has traces of three trapezoidal doorways with remnants of plaster and pigments.

Ecuadorian archaeologist José Echeverría leads us through the site, down a winding path that follows the low outlines of partially excavated walls. He explains that, in 2006, he was helping clear debris left over from a brickmaking operation when he uncovered some Inca masonry at the east end of the site, which turned out to be part of a large ceremonial pool about 33 by 55 feet in size. It was dug to a depth of four to five feet below the modern ground level and was surrounded by walls about three feet high. The walls and floor were made of finely cut and fitted stone. 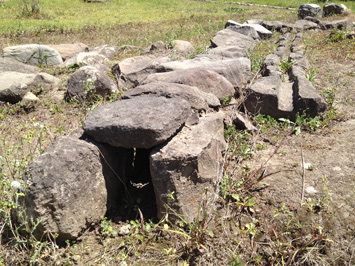 Bray and Echeverría believe the pool may date to a period in the early 1500s, shortly after the Inca ruler Huayna Capac had concluded a 10-year war of conquest against the local people, the Caranqui. Legend has it that Huayna Capac had every adult male Caranqui executed. Their bodies were thrown into a lake known today as Yahuarcocha, or the “Lake of Blood,” on Ibarra’s northeast edge. Spanish chronicler Pedro Cieza de León estimated the conflict left 20,000 to 50,000 Caranqui dead.

Bray and Echeverría think that in the aftermath of that bloodshed, the Inca built the pool as part of a construction project that was meant to demonstrate their power to their new Caranqui subjects. The ceremonial pool would have represented a considerable investment of wealth and labor by the Inca. It also would have showed their skill as engineers by bringing water from as far as five and a half miles away and demonstrated their mastery over a resource with powerful religious symbolism. 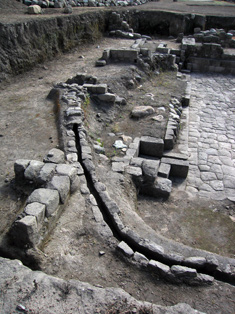 The Caranqui are best known for the dozens of large earthen mounds called tolas they built between A.D. 1200 and 1500. The Inca ceremonial pool was built next to the central part of a Caranqui settlement that had been about 25 acres in size. Radiocarbon dates from the site show that it was occupied on two occasions with a long period of abandonment in between. Dates from several burials indicate that an unknown group of  people first lived at the site sometime between 40 B.C. and A.D. 80. One of the burials held the remains of a woman over the age of 40, who Bray believes was an important person because she was buried seated upright with a shell-bead necklace, two folded gold discs, and a large ceramic dish. The Caranqui themselves probably occupied the site around A.D. 1250 and continued there until sometime between 1420 and 1480, a date that came from a radiocarbon sample associated with an Inca wall. These dates generally correspond with the time other Inca sites in the northern part of their empire were being settled. Only a small handful of Inca ceramics have turned up, which, Bray says, is one indicator that they weren’t here long.

Cieza de León, the first Spanish chronicler to visit the site in person, wrote in the late 1540s that “even though [the site] is in total ruins today, one can see that it was a grand place in former times.” He described royal palaces and dwellings made of “large, elegantly cut, and subtly fitted stones.” Among these was a fine estanque (“pool”) made of piedra muy prima (“the finest stone”). 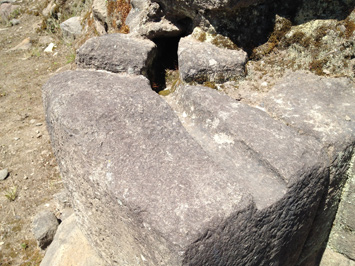 Bray and Echeverría think they have found the estanque Cieza de León recorded. “We call it the ‘Templo de Agua’—the Water Temple,” Bray says. “You find pools at almost every Inca site, but they’re usually 10 or 20 square feet—nothing like this.” Only three or four sites in Ecuador have this kind of Inca masonry, which seems to have been reserved for palaces and temples, she says. “We don’t know if it was intended to hold water for any significant amount of time or not, but it was clearly built for the circulation of water and people,” she adds, referring to the water channels and the sets of steps in each corner of the pool.

Two distinct styles of canals run through the lot and into the pool. The larger type was lined and capped with roughly worked stone. The other was made of stone blocks 20 to 30 inches long laid end to end, each with a grooved channel carved into it. Bray points out various features to explain how they think the water circulated. Streams from the slopes of Imbabura, five and a half miles away, were directed to the site through canals and emptied into the pool through a series of spouts on the south side and a carved stone canal on the east. The water would have drained through two carved holes and into an underground canal, also on the east side.

Spanish chroniclers disagree over which Inca ruler built these structures and why. One Spaniard, Fernando de Montesinos, says that it was Huayna Capac, who then departed for Cuzco but left behind his two-year-old son, Atahualpa, to be raised by Inca authorities. Another, Juan de Betanzos, says Atahualpa himself ordered the construction to commemorate his father, who died of smallpox around 1527, and to celebrate his upcoming wedding and ascension to the throne.

Bray thinks that each explanation may be partly correct, noting that the pool apparently went through two periods of construction. Echeverría points out a large area where flooring stones had apparently been removed down to the underlying soil. At the edge of this section, two levels of flooring are clearly visible: a lower level made of rectangular blocks, and an upper level of smaller, more polygonal stones. 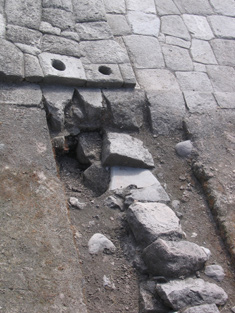 “I think Huayna Capac built the site, and then Atahualpa remodeled it for his coronation,” says Bray. Every new Inca ruler traditionally founded an estate for his royal lineage and Bray believes that may have been Atahualpa’s intention at Inca-Caranqui. The new floor level would have been part of Atahualpa’s remodeling. It could also have been to correct some kind of functional problem, she admits. Either way, she says, it was probably the last major Inca construction project. In 1532, the Spanish under Francisco Pizarro arrived just as Atahualpa defeated his half-brother Huascar in a civil war. Within a year, Atahualpa had been executed and the Spanish conquest was well under way.

As architecturally impressive as the site is, Bray says, it’s hard to overstate its symbolic importance. “Manipulating water was clearly a huge deal to the Inca. They’re manifesting physical control and power over an important local resource.”

Controlling water was essential, says Carolyn Dean of the University of California, Santa Cruz, because either too little or too much could be disastrous to crops. As a result, hydraulic features were common in Inca architecture, and many of them balanced practical, aesthetic, and symbolic elements. They were drawing on thousands of years of previous experience, says Charles Ortloff, a hydraulic engineer specializing in ancient water systems. Earlier cultures such as the Wari, Chimú, and Tiwanaku were experts in manipulating water in a land with few reliable sources and regular climatic extremes, from El Niño events to centuries-long droughts. 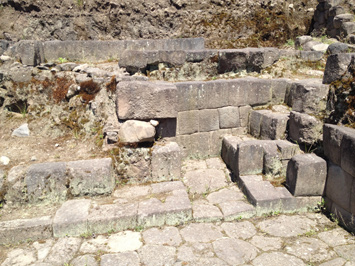 “It’s really impressive, what the Inca did without iron, steel, or written language,” says Ken Wright, a hydraulic engineer who has studied Inca water control techniques. “They did so much with so little, it’s just miraculous,” he says. The Inca came to power in a period of increasing precipitation, after a drought that lasted roughly from A.D. 950 to 1200. They took earlier techniques and raised them to new levels of technical and aesthetic sophistication, Wright says. Agricultural terraces were fed by long canal systems, optimized to carry certain flow rates and prevent washout after excessive rainfall.

“They were absolute experts in elaborating the natural world in a way that made the water both useful and ritual,” says Jerry Fairley of the University of Idaho. He adds that the Inca had developed a system of groundwater storage at settlements such as Tipón and Tambomachay near Cuzco, where walls were built at the bottom of geologic basins to hold back groundwater in the soil itself. The water could then be discharged through an opening in the wall.

All these features were fed and drained by channels or canals that ranged from a few inches to many feet wide, he explains. They could be covered or open, above- or belowground, straight or curved or zigzagged. As they split apart and joined together, Dean believes, the canal networks followed the Inca principles of p’allqa (“division”) and tinku (“joining”), concepts at the core of their view of the universe as a balance of complementary forces.

Water was a sacred natural force to the Inca, Dean says, adding, “to manage water, to ensure its availability and control its amount, was to manage the essence of life.” In the Inca view, all water came from a single source called Mama Qucha, embodied by the ocean and large lakes. It circulated in a continuous cycle between the underworld, the earth’s surface, the atmosphere, and the heavens, where the Milky Way was seen as a giant river. 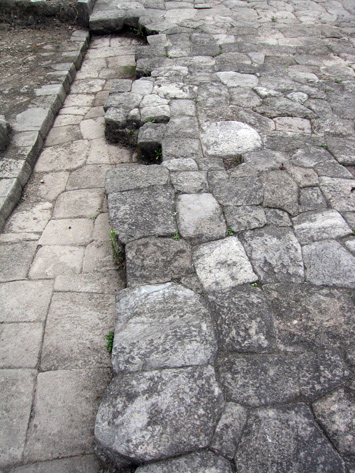 The Inca considered some natural springs to be sacred places of ancestral emergence, mirrored by the water itself coming to the surface, Dean says. The Inca often enhanced these natural sources with fine stonework such as spouts and pools in places such as the 500-acre royal estate of Tipón. “Display fountains” in prominent locations were designed to appeal to the senses with the sight and sounds of water flowing through channels and over steps or terraces. Reservoirs, holding tanks, and cisterns arranged throughout the site helped regulate flow. Some of these features probably served as basins or baths, places of ritual purification and cleansing, a common practice in the Andes in pre-Hispanic times, according to Dean.

There was also a definite political element to Inca water architecture. “The idea is to impress the hell out of the natives,” says Gordon McEwan of Wagner College. This may have been an especially important task in new territories at the edges of the empire. “The Inca were saying, ‘Our emperor is a demigod, and we control the most important things in life: fertility and water.’” The area that is now Ecuador was very rebellious, Dean explains, and places such as Inca-Caranqui showed what the new overlords had to offer, both technologically and culturally.

According to Dean, the Inca believed they were bringing civilization to less developed regions. “Part of any Inca ruler’s reputation was his ability to increase his territory as a warrior,” Dean says. “But equally important—and I think even more so—was his ability to make that newly acquired land even more productive than it had been. Destruction only takes you so far. Afterward, the really important part was to create things.”

Julian Smith is a contributing editor at ARCHAEOLOGY. 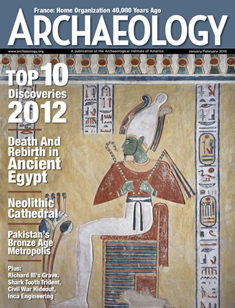 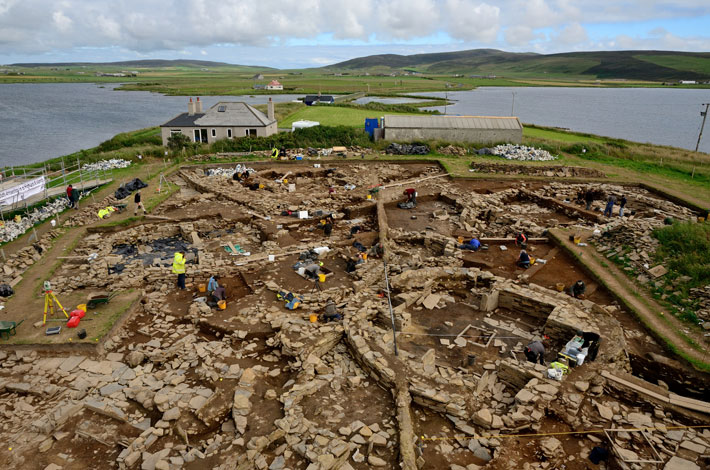 Neolithic Europe's Remote Heart
One thousand years of spirituality, innovation, and social development emerge from a ceremonial center on the Scottish archipelago of Orkney