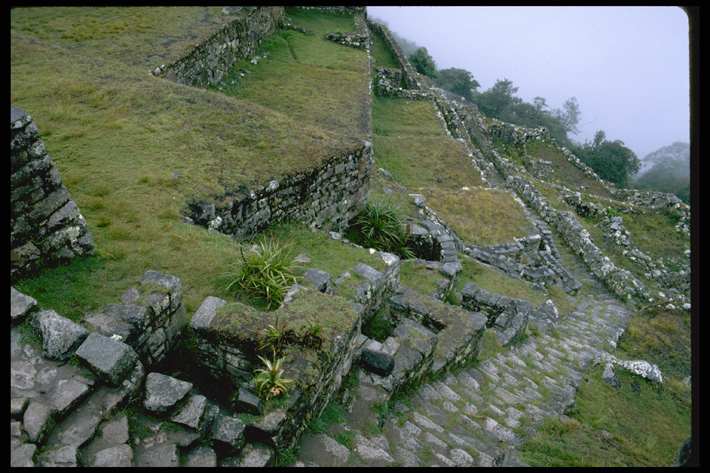 One of the most spectacular examples of Inca hydraulic engineering is the "Stairway of Fountains," built sometime after 1450 at the city of Machu Picchu. The fountains supplied the city's inhabitants with clean, fresh water. The first challenge the Inca faced was how to bring water from a pair of rain-fed springs almost half a mile away from the first fountain. At the main spring, Inca engineers built a 48-foot long permeable wall that concentrated the seeping water into a stone-lined canal. The canal also collected water from a second, smaller spring. Water flowed to the city through the canal, which averaged five inches wide and five inches deep, and had an average grade of about 3 percent. Hydraulic engineer Ken Wright calculates the system could carry up to 80 gallons per minute—twice as much water as the springs' typical peak flow—to prevent overflows. 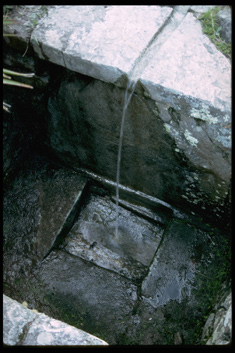 The canal passed under the city's outer wall, through the agricultural zone, and under another wall into the residential zone, where it flowed through a series of 16 fountains. Each fountain had a spout designed to shape a jet of water that was the perfect size for filling an aryballo, the clay water jug of the ancient Andes. The fountains were linked by stone channels that formed a 180-foot-long cascade of water with a total vertical drop of 65 feet. The first fountain was next to the emperor Pachacuti's residence, allowing him first access to the water. All the fountains, including Pachacuti's, were publicly accessible except the last one, which was located inside the Temple of the Condor.

The result was a controlled, dependable public water supply that protected the hillside architecture from erosion. "Nothing like it exists," says hydraulic engineer Charles Ortloff, "in an urban setting at other royal residence sites or at other Inca settlements."

Julian Smith is a contributing editor at ARCHAEOLOGY