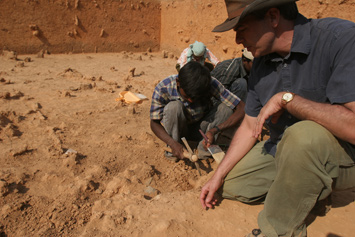 For years, archaeologists and geneticists have been troubled by the fact that their time lines for key events in human evolution don’t always match up. While archaeologists rely on the dating of physical remains to determine when and how human beings spread across the globe, geneticists use a DNA “clock” based on the assumption that the human genome mutates at a constant rate. By comparing differences between modern and ancient DNA, geneticists then calculate when early humans diverged from other species and when human populations formed different genetic groups.

The DNA clock is a powerful tool, but its conclusions—for example, that modern humans first emerged from Africa about 60,000 years ago—can disagree with archaeological evidence that shows signs of modern human activity well before that date at sites in regions as far-flung as Arabia, India, and China.

Now, new work, based on observation of the genetic differences between present-day parents and children, suggests that the genetic clock may actually run about twice as slowly as previously believed, at least for the last million years or so of primate history. In their review paper in the journal Nature Reviews Genetics, Aylwyn Scally and Richard Durbin of the Wellcome Trust Sanger Institute in Hinxton, England, propose much earlier dates for watershed events in human evolution, which could help bring the genetic and archaeological records in line. For instance, a slower clock places the migration of modern humans out of Africa at around 120,000 years ago, which is more consistent with archaeological evidence.

The revised clock also supports archaeological signs of modern human activity from more than 60,000 years ago at sites such as Jwalapuram, India (“Stone Age India,” January/February 2010), and Liujiang, China—evidence that has often been dismissed by geneticists as impossible. While more work is needed to confirm the findings, Scally says that archaeologists who work on such sites should be excited: “It can no longer be said that the genetic evidence is unequivocally against them.”