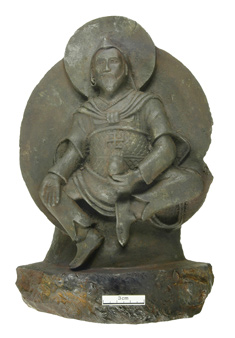 The world is full of strange, unmoored historical artifacts. Some come with puzzling, mysterious origins and interesting, if unconfirmed, auras of intrigue. Take the Nazi Buddhist iron man from outer space. This 10-inch-tall, 24-pound sculpture apparently depicting a Buddha figure with scale armor bearing a swastika has some pretty dubious provenance: It’s rumored to have been found during Nazi expeditions to Tibet, perhaps part of an effort to establish Germany’s Aryan roots. (Prior to its life as the calling card of National Socialism, the swastika enjoyed thousands of years as a positive symbol in South Asian religions.) Recent mineralogical analysis by German, Australian, and Austrian researchers now shows that the statue may have been sculpted from a meteorite that fell somewhere along the Siberian-Mongolian border. The paper, in Meteoritics and Planetary Science, also sparked heated debate about the statue’s origins. Buddhist scholar Achim Bayer at Dongguk University in Seoul, Korea, says that the statue is most likely just decades (rather than centuries) old, perhaps made after WWII for the lucrative market in Nazi memorabilia.