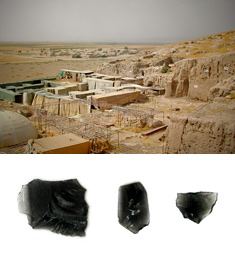 Three small and apparently unremarkable pieces of obsidian, found in the palace courtyard of the ancient city of Urkesh in modern-day Syria, are changing ideas about trade networks at the height of the Akkadian Empire’s power. Urkesh sits near a mountain pass by the border between the Bronze Age Hurrian and Akkadian empires—putting it in a natural position to be a trading center. According to Ellery Frahm of the University of Sheffield and Joshua Feinberg of the University of Minnesota, decades of studies had shown that nearly all of the obsidian used in Urkesh and sites throughout Mesopotamia came from volcanoes in what is now eastern Turkey. Frahm, however, tested this by analyzing the magnetic properties of 97 pieces of obsidian found throughout the city and learned that three of the pieces came from a volcano located much farther away, in central Turkey. These pieces were dated to around 2440 B.C., about the time that Emperor Naram-Sin expanded the Akkadian Empire to its peak influence. Frahm believes that the Akkadians were expanding their trade networks into new territory. The three pieces of obsidian may have been from items traded along with more valuable goods, such as metals. According to Frahm, “It shows that they were tapping into a trade network at that time that they weren’t using before or after.”