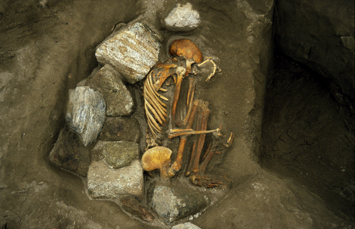 Instances of deliberate mummification in Europe are rare, but, while performing excavations in 2001 at Cladh Hallan, a Bronze Age settlement on the island of South Uist in Scotland’s Outer Hebrides, archaeologists found a pair of 3,000-year-old skeletons that fit the bill.

Both skeletons, one male and one female, were buried in the fetal position. Tests indicated they had been intentionally preserved for some time in nearby peat bogs, where microbes prevented them from fully decomposing, before they were eventually retrieved. “Mummification has been surprisingly widespread throughout world history, but this is the first time we’ve seen clear evidence that it was employed during the Bronze Age on the British Isles,” says University College London archaeologist Mike Parker Pearson.

Further examination of the remains led to another startling discovery. The male skeleton is actually a composite. Its torso, skull and neck, and lower jaw belong to three separate men. New DNA tests prove that the female skeleton is also a composite formed from a male skull, a female torso, and the arm of a third person, whose gender has yet to be determined. Carbon dating indicates that the skull of the female mummy is probably 50 to 200 years older than the torso.

Archaeologists have yet to agree why these remains were mummified and then mixed together. “The mixing of remains could have been designed to combine different ancestries or families into a single line of descent,” Parker Pearson explains. “At the time, land rights would have depended on ancestral claims, so perhaps having ancestors around ‘in the flesh’ was the prehistoric equivalent of a legal document.”