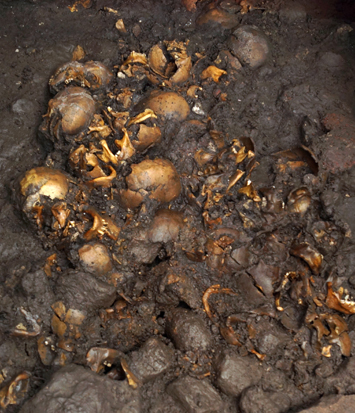 Mexico’s Templo Mayor was a center of Aztec civic life before the Spanish conquest. In 2012, archaeologists learned more about its importance for civic death. In a grisly discovery, they excavated more than 1,000 tightly packed human bones, among them 45 skulls and 250 jawbones. There was only one complete, undisturbed skeleton, in a separate cache—a woman, lying face down, her left hand resting enigmatically on her back and her right on her abdomen. She was surrounded by more bones, including at least 10 skulls, plus ceramic and charcoal offerings.

Raúl Barrera of Mexico’s National Institute of Anthropology and History says the larger cache was probably a “closure deposit” buried as a kind of consecration after an important building phase around 1479. Because the bones are so crowded together, he says, they must have “been buried elsewhere, exhumed, and reburied here.” But not all of them. Barrera’s team excavated a volcanic slab used for human sacrifices, beneath which they found five more skulls with gaping perforations. The victims may have died on the sacrifice stone, but the holes were probably for mounting their skulls on a stake known as a tzompantli. It may all seem macabre to us, but to the Aztecs, this charnel house was, according to Barrera, “where the earthly and heavenly realms communicated with each other.”