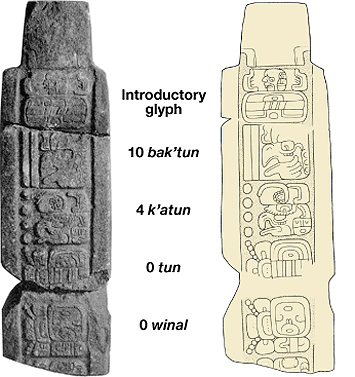 The Maya calendar that records the longest span of time is called the Long Count. It marks the number of days that have passed since a mythological founding date that fell on either August 11 or 13, 3114 B.C., depending on how the Maya calendar is reconciled with our calendar. Long Count dates are usually written as a series of five numbers, such as 7.17.18.13.3 (the date that corresponds to January 1, A.D. 1). The smallest unit of time is the day, or k’in, and it is recorded in the place farthest to the right. The next place records the number of winals, a 20-day unit of time often referred to as a “Maya month.” The third place records the number of Maya years called tuns. Eighteen winals make up a tun, for a total of 360 days. The Maya extended the count by multiplying each successive cycle by 20. Thus, 20 tuns make up a k’atun, and 20 k’atuns make up a bak’tun—a period of time equivalent to 394.52 solar years.

Maya monuments that have Long Count dates often include dates from other types of calendars. The two most important of these time cycles are the tzolk’in, a 260-day cycle that may be based on the duration of a human pregnancy, and the haab, a calendar that approximates the solar year. One example of an artifact that includes dates from all three calendars is monument six from the site of Tortuguero. An inscription on that monument mentions the date at the end of the thirteenth bak’tun, which falls on December 23, 2012, written as 13.0.0.0.0 4 Ajaw 3 K’ank’in by the ancient Maya. 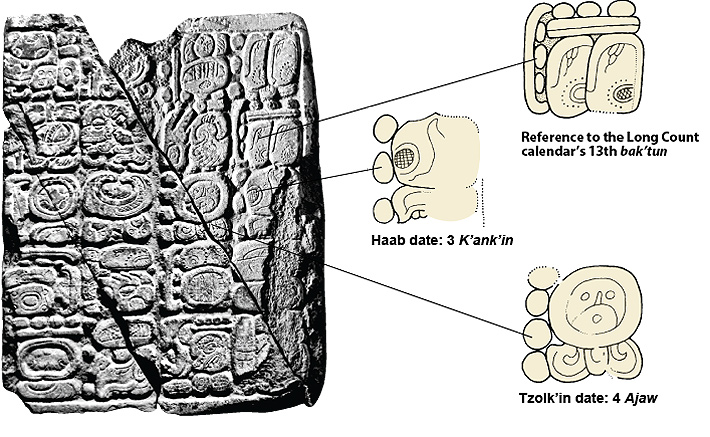 The date 4 Ajaw records the day in the tzolk’in calendar. The tzolk’in is based on a 13-day “week.” The number 4 in the date records the day of the week. There are also 20 named days, so each day has a name and a number. The first named day is Imix, which translates as “water serpent” in Yukatek Mayan, followed by Ik’ (“wind”), and Ak’bal (“night”). The numbers run concurrently with the names, so the first day of the tzolk’in calendar is 1 Imix, followed by 2 Ik’, and then 3 Ak’bal. After day 13 is reached, the numbers start over but the names continue, therefore the fourteenth day of the tzolk’in is called 1 Ix (“jaguar”). This cycle continues for 260 days, when the calendar returns to 1 Imix. The twentieth day name, and the one mentioned in the Tortuguero monument, is Ajaw (“lord”), which was the day when many important festivals commemorating period endings were celebrated.

The tzolk’in and haab calendars were also used together in what is called the “Calendar Round.” Starting at 1 Imix 0 Pop, it takes 52 haab years or 73 tzolk’in cycles for the two calendars to come around again to that date. The last calendar round was completed on April 28, 2011. The next one will end on April 15, 2063.