An Eye on Venus 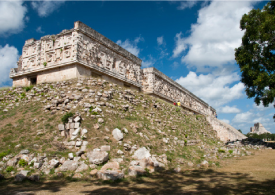 The sun and the moon were not the only celestial bodies of importance to the ancient Maya. The movements of the planet Venus also held special meaning for them. Tables that mark Venus’ position throughout the year are recorded in ancient Maya books called codices and on monuments throughout the Maya kingdoms. Venus also seems to have influenced the architecture of the city Uxmal in the northwestern part of Yucatán, Mexico. Anthony Aveni, an archaeoastronomer at Colgate University, believes that the royal residence named the “House of the Governor” was designed with the observation of Venus in mind. Venus symbols decorate its façade and from its central doorway an observer can still see the planet align with monuments across the site that mark the northern and southern extremes of Venus’ migration along the horizon throughout the year.

Venus orbits the sun approximately every 225 days, but as it is seen from Earth, the planet appears to move back and forth relative to the sun in a cycle that lasts 584 days. Five of these oscillations—2,920 days—are almost exactly as long as eight solar years. Aveni believes that Maya priests saw significance in this astronomical coincidence. “For the Maya, everything has to be brought together in terms of whole multiples and that’s where Venus comes in. It has a five-to-eight rhythm with the sun,” says Aveni.

Venus also appears to go through four phases. For 250 days the planet is known in Western cultures as the “Evening Star” as it follows the setting sun. After the Evening Star phase, Venus disappears for eight days before returning as the “Morning Star”—the 236-day-long phase when it rises just before dawn. After the Morning Star phase, Venus disappears for 90 days before returning again as the Evening Star. A document from Central Mexico written in the late 1500s called the Annals of Cuauhtitlan associates the eight-day period between the Evening and Morning Star phases with the death and resurrection of Quetzalcoatl, a deity known as Kukulcan to the ancient Maya. Kukulcan was the sky god and the most powerful of the ancient Maya deities. According to Aveni, rituals celebrating the appearance of the Morning Star may have been held on the large plaza in front of the House of the Governor, providing the rulers of Uxmal with a way to commemorate their ties to the sky god.