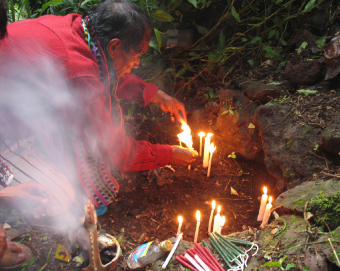 The Long Count calendar may be a relic of the past, but modern-day Maya communities in the highlands of Guatemala still have “Daykeepers,” people whose job it is to maintain a 260-day ritual calendar. Allen Christenson, an anthropologist at Brigham Young University, apprenticed himself to a Daykeeper to gain a better understanding of Maya concepts of time and the cosmos. According to Christenson, the Daykeepers’ role in the community is to keep track of different cycles of time, to perform the proper rituals to keep the cycles running, and to heal people when they are sick. The 260-day calendar they use today is the same as the tzolk’in calendar used by the Maya 1,000 years ago, although the modern calendar is shifted two days later than the ancient one. One concept that seems strange to the Daykeepers with whom Christenson has worked is the idea that some kind of apocalypse is going to happen on December 23, 2012. Until recently the highland Maya had little or no knowledge of the predictions regarding the 2012 date, but that doesn’t mean that they don’t think the world will end. “The world is going die on December 23,” says Christenson, explaining that the Maya believe the world dies each day when the sun sets, or when crops are harvested. “The world is constantly dying,” he says, “and the role of the Daykeeper is to make sure they get things going again.”