In 2010, a team led by Fritz Hanselmann of Texas State University retrieved six cannons that may have belonged to notorious privateer Captain Henry Morgan from Lajas Reef in Panama. A year later, Hanselmann returned to the Caribbean mouth of the Panama Canal with a crack team of maritime archaeologists to look for more. Investigating one of the anomalies recorded during magnetometer surveys, the team saw what appeared to be a rocky coral outcrop. Further investigation showed it to be encrusted wood. Within an hour, Hanselmann and his team had found a wooden chest with a latch on it. 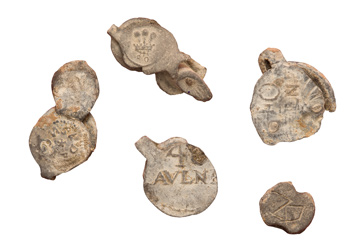 At the beginning of the 2012 season, Hanselmann and his team returned to the site for more investigation and documentation. The wreck is nestled in the soft sandy seafloor under 25 feet of water. Using a makeshift water cannon, Hanselmann cleared the accumulated sand from the wreck, revealing a strange grid: a floor of wooden boxes, packed tightly, in perfect rows. The tops of a few of the boxes are gone and their contents visible, including concreted masses of horseshoes (providing the wreck with its name, the “Horseshoe Wreck,” though they’re more likely to have been used on donkeys), in addition to nails, and other supplies. Some of the wood carries a herringbone pattern, perhaps from nets used to secure it on the ship. The team has documented more than 75 chests and portions of the wooden hull. Lead cargo seals indicate it was most likely a Spanish merchant ship. One candidate is Chaperone, a ship from the Tierra Firme Armada known to have foundered in heavy seas in 1681 at the mouth of the Chagres, or it may be a barge that sank while removing Chaperone’s cargo was being removed. In providing a picture of Spanish commerce at a time when their New World empire was faltering, the wreck offers more information about the struggling economy of the Spanish Main when Morgan arrived.

For example, one of the seals has a fleur-de-lis on it, suggesting French origin. At the time, the Spanish had clamped down on trade with external parties. But people in the overstretched empire may have had to trade wherever and with whomever they could. The seal hints at an “undocumented, unspoken black market occurring across nationalities,” says Hanselmann. Perhaps this economic strain is one reason that Morgan met with so little resistance in his march to Panama City.

“They’re all intertwined and they’re all interconnected,” says Hanselmann of the Horseshoe Wreck and the other wrecks—Morgan’s—he still hopes to find.