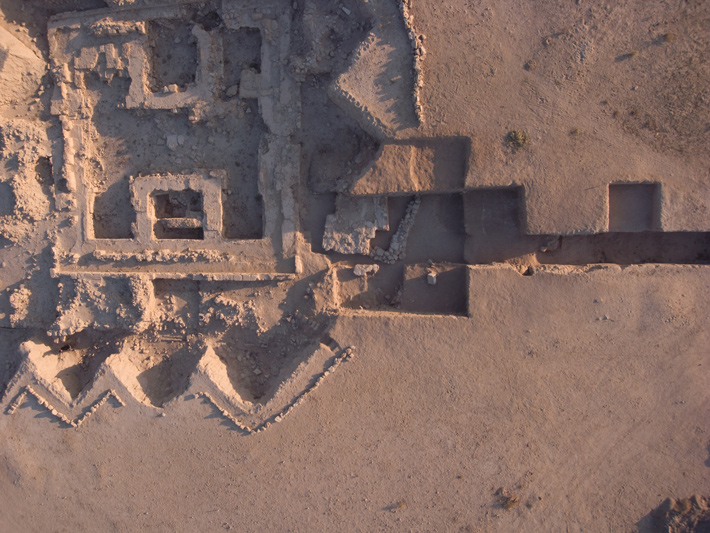 In the mythology of ancient Sumeria (modern Iraq), Dilmun is described as an Eden-like place of milk and honey. But by 2000 B.C., Dilmunites were leaving their homeland to become seagoing merchants and establish a powerful trading network that eventually stretched from India to Syria. Mesopotamian clay tablets refer to ships from Dilmun bringing wood, copper, and other goods from distant lands. By the nineteenth century B.C., Failaka had become a linchpin in the Dilmunites’ operations. At this point, after the Dilmunites had either ousted the Mesopotamians or merely succeeded them, there are no further signs of a Mesopotamian presence. The Dilmunites constructed a large temple and palace complex almost on top of the houses built by the earlier Mesopotamian residents. A French team that excavated the temple in the 1980s suggested that it was an oddity, possibly related to Syrian temple towers. But recent work by a team from the Moesgård Museum in Denmark points to a building remarkably similar to the Barbar sanctuary in Bahrain, considered the grandest Dilmun structure.

The Failaka temple sat on a large platform nearly 90 feet wide and 120 feet long and the temple itself once measured 60 feet square, only slightly smaller than the Barbar temple. The most impressive remains of the Failaka structure are the shattered, mammoth limestone columns that once supported the temple. Such stone is not found on the island. Dilmunites quarried the massive blocks on the mainland, then ferried them to the island, an impressive feat requiring not only extensive planning and coordination efforts, but also large, seaworthy craft. The columns were also highly valued in later eras, and much of their stone was plundered and taken back to the mainland in antiquity. The Moesgård team is now focusing on the so-called palace, originally excavated in the 1960s, that lies about 30 feet from the temple. Work is still under way, but there are signs that it may have served not as a royal residence but rather as an important series of large storerooms to house the goods that made the Dilmunites a formidable economic power.