Ikaros of the Gulf 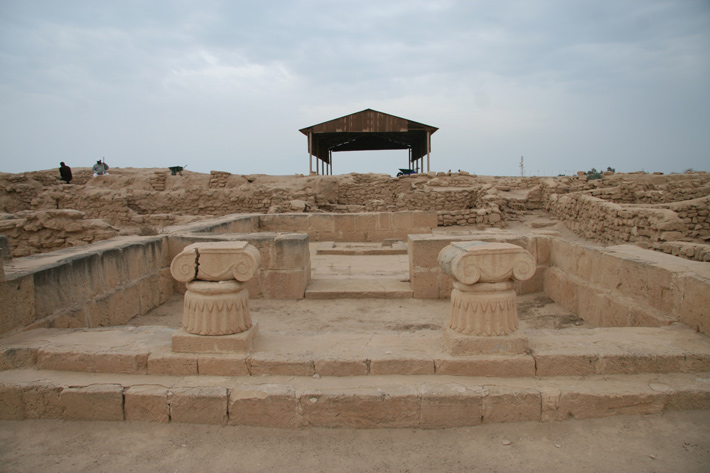 Failaka’s name is derived from the Greek word for outpost. But Alexander the Great, according to later classical authors such as Strabo and Arrian, gave Failaka the name Ikaros, since it resembled the Aegean island of that name in size and shape. French archaeologists working on the island in recent years have found several stone inscriptions dating to the fourth and third centuries b.c. mentioning the name Ikaros, as well as architecture and artifacts that reveal a bustling community with international ties during that period. The island’s accessible fresh water, easily defended coastline, and strategic location also attracted the attention of Alexander’s successors, who vied among themselves for control of regional trade routes. Antiochus I, who ruled the Seleucid Empire in the third century B.C., built a 60-foot-square fort around a well on Failaka. Inside the fortress compound, one small, elegant temple has Ionic columns and a plan that is quintessentially Greek, including an east-facing altar. This was no simple import, however, but a fascinating amalgamation of designs. The column bases, for example, are of the Persian Achaemenid style, similar to those in the capital, Persepolis, burned by Alexander’s troops in the fourth century B.C.

According to Mathilde Gelin from the French Institute of the Near East in Damascus, who is currently working at the site, this unusual pairing reflects a rare fusion of Greek and Eastern cultures—much like Antiochus himself, who was the son of a Macedonian general and a Bactrian princess, likely from today’s Afghanistan. The sturdy fort eventually grew into a bustling port town, with other temples, houses, and larger fortifications, until its eventual abandonment by the first century b.c. Gelin hopes the current excavations will reveal what role the fort and settlement played in both island life and that of the wider region during a time of remarkable cultural mixing.