The story of Failaka after the abandonment of the Christian villages remains shadowy. Currently archaeologists are turning their attention to several sites that sit along the northern shore of the island to probe the medieval and early modern periods. The most interesting is located on a high spot overlooking the gulf, facing Iraq. Nearly 30 years ago, a team from the University of Venice surveyed the site, pinpointing a village, called Al-Quraniya, that dates to at least as early as the seventeenth century A.D., and possibly several centuries earlier. In 2010, an Italian team led by Gian Luca Grassigli of the University of Perugia began intensive fieldwork there. The excavators have since uncovered an array of pottery, porcelain, glass bangles, and bronze objects, including nails and coins, dating to between the seventeenth and nineteenth centuries A.D. The mound seems to have two large concentrations of building materials, and the archaeologists hope to make a detailed plan of the settlement in future campaigns. Deeper trenches may reveal evidence of earlier settlement, filling in the long gap between the abandonment of Christian villages and more recent times. 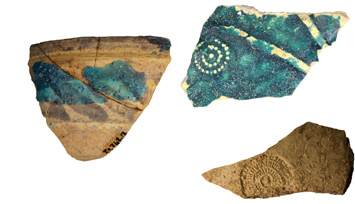 What is clear is that Failaka was still a notable outpost two millennia after Alexander. Just to the southeast of the village is a small square rock fort dating to about the sixteenth or seventeenth century. Some researchers believe that this structure was constructed by Portuguese soldier-merchants who did frequent business in the region. others suspect that Arab pirates built the base to attack the lucrative shipping lanes that led to wealthy Iraqi cities such as Basra or to ports along the Iranian coast to the east. In this era, european, Iranian, and chinese elites had a growing appetite for the gulf pearls that dominated the region’s economy. Pirates were a constant threat until the nineteenth century; British guns and diplomacy put an end to their raids.