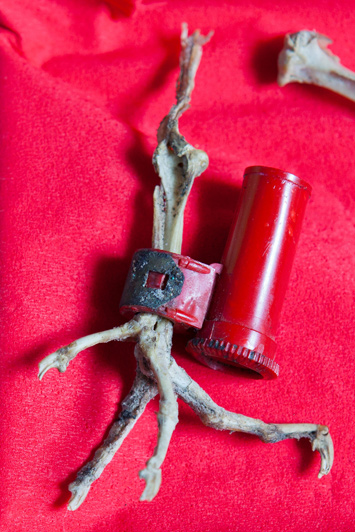 Colin Hill, a member of the Royal British Pigeon Racing Association, was astounded to learn last year that in the 1980s, the remains of a WWII courier pigeon were discovered in the unused chimney of a home near London. Among the doomed homing pigeon’s bones was a container holding a message consisting of 27 five-letter codes. Hill, also the curator of the pigeons exhibition at Bletchley Park, home of Britain’s wartime code-breaking effort, knew that the birds were often trusted with urgent military communications, so he couldn’t believe the discovery had gone unnoticed for three decades. Hill lobbied the GCHQ—the British equivalent of the National Security Agency—to decode the message, which may have been sent during the D-Day landings.

The government has declared the code unbreakable, but perhaps the heroic columbid didn’t die in vain. Its last mission has focused worldwide attention on the legacy of Allied homing pigeons. More than 250,000 saw active service in WWII, and 32 received the Dickin Medal, the highest British military award offered to animals. Among them was “G.I. Joe,” an American bird whose timely delivery of a message helped save 100 British lives in Italy. His stuffed remains are on display at Fort Monmouth, New Jersey.