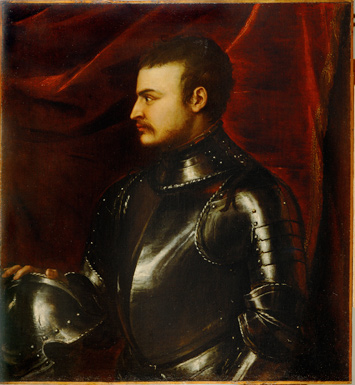 An investigation into the tomb of the Medici warrior known as Giovanni dalle Bande Nere (“of the Black Bands”), born Lodovico de Medici in 1498, has raised new questions about the famous mercenary’s death. Giovanni earned a fierce reputation early on in life; he was reportedly exiled from Florence at the age of 12 for committing murder. However, his warlike character allowed him to excel as a prominent military captain under the early-sixteenth-century Medici popes, Leo X and Clement VII. He acquired the nickname “dalle Bande Nere” after adding black stripes to his insignia to mourn the death of Pope Leo X in 1521.

Contemporary Italian accounts of Giovanni’s death indicate that he was struck by a cannonball in 1526. These sources state that his wounds required the amputation of his right leg above the knee, and that he died shortly thereafter, possibly from gangrene resulting from surgery. The Renaissance   warrior’s remains have recently been exhumed from the Medici Chapels in Florence. Surprisingly, the bones show that the traditional accounts of his death may not be entirely accurate. Only the lower leg and foot were removed, and the femur was intact. Currently the skeleton is being studied by a team at the University of Pisa led by paleopathologist Gino Fornaciari. “We have already learned that he was a very vigorous man, about 5 foot 8 inches tall, and with evidence on his bones that since adolescence, he carried extremely heavy armor and was often mounted on a horse,” says Fornaciari. “With further study we hope to clarify how Giovanni was wounded and the type of surgical intervention that took place, as well as reconstruct more details about the lives of the Medicis.”