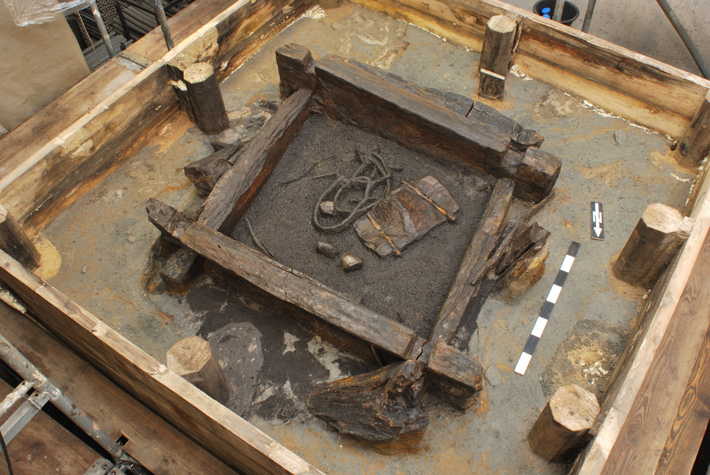 Researchers in Germany have discovered four wells more than 7,000 years old. The wells, all underground constructions of hewn oak, are evidence that Neolithic inhabitants of central Europe were accomplished carpenters, capable of felling and working trees three feet thick into planks, then carefully fitting them together. One of the wells, found near the town of Altscherbitz, was removed from water-logged soil in a single 70-ton block and transported to Dresden, where archaeologists “excavated” it in a lab.

There, analysis revealed that the ancient well-builders constructed tusk mortise and tenon joints, a technique that uses a fitted wedge to lock the pieces in place, in the base frame, with the rest constructed in “log cabin” style. “We know the Romans could do it, but that they were in use 5,000 years earlier really came as a surprise,” says Rengert Elburg, an archaeologist at the Saxon Archaeological Heritage Office in Dresden.

The 151 pieces of wood recovered from the wells are also an invaluable source of data for dendrochronologists, who compare tree rings to date artifacts and learn more about past climate conditions. Tree rings suggest the Altscherbitz well was in use for less than a decade before it was deliberately filled with 26 intact pots, thousands of pot fragments, and organic materials including early grains such as emmer and einkorn, strawberries, hazelnuts, and black henbane, a powerful hallucinogen. According to Elburg, the discovery of the pots was particularly surprising. “We don’t normally find intact pots from the Neolithic,” says Elburg. “If you find 26 complete ones, you know it was a ritual deposition. Perhaps it was a well for ritual water or special drinking.”