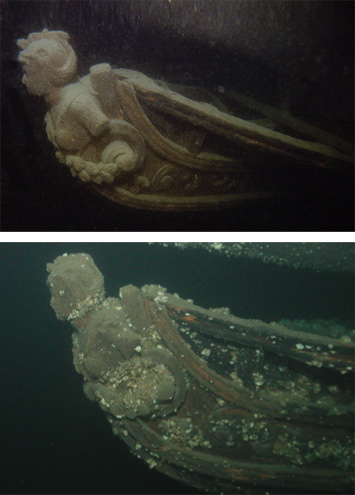 For the last 25 years, invaders have staked an ever-more-alarming claim to the Great Lakes. Zebra and quagga mussels, small molluscs native to eastern Europe, are a serious problem in bodies of freshwater throughout the Midwest. They have colonized and blocked water pipes, and can lead to the breakdown of dock pilings and even steel and concrete. The ongoing invasion has underwater archaeologists concerned about the fate of the lakes’ many historic wrecks. This concern led Parks Canada and the city of Hamilton, Ontario, to begin a new effort to examine the wrecks of Hamilton and Scourge, two merchant ships that were pressed into military service in the War of 1812 and sank in a sudden squall in 1813. Recent surveys using sonar and remotely operated vehicles have revealed significant infestation of the well-preserved wrecks. The quagga mussels present a long-term preservation concern, and they also conceal the wrecks (even though, ironically, they tend to make the water clearer), making the sites increasingly difficult to study and assess.