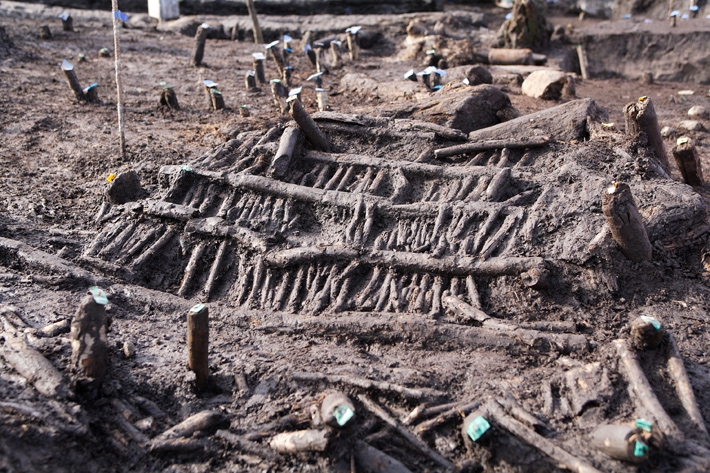 Digital activism carried out by a group of local archaeologists in Northern Ireland has led to the excavation of a significant site that would otherwise have been overlooked. In addition, the campaign has spurred an investigation into cultural heritage management practices and archaeological protocols in the region.

One of the best-preserved rural medieval settlements in the British Isles, the site, in Drumclay, was uncovered by archaeologists excavating a bog in the path of road construction. Working for the Northern Ireland Environment Agency, archaeologist Nora Bermingham and her team have shown that from the eighth to sixteenth centuries, the bog was a lake where generations of a noble Gaelic clan maintained an artificial island that measured some 260 feet across. Known as crannogs, such man-made islands were constructed by medieval elites throughout Scotland and Ireland for both defensive purposes and to broadcast a family’s high status. Few have been excavated since the 1930s, and none on the massive scale of the Drumclay site.

Previously excavated crannogs held up to five dwellings each, but so far Bermingham’s team has discovered the remains of more than 30 wooden buildings that span the site’s 800-year history. The family associated with it probably maintained five structures on Drumclay crannog at any one time, give or take, and about 30 people would have lived there. Though the crannog was marked on nineteenth-century maps and archaeologists scouting the proposed road route noted its presence, little was done to study or preserve it until last summer, when a limited six-week dig was organized by the Northern Ireland Roads Service. Concerned that authorities were preparing to shut down excavation of a major site before it had been properly studied, archaeologists on the project leaked information and photos from the dig to former medieval archaeologist Robert Chappelle, who posted them to his blog. Local archaeologists then launched a robust social media campaign to encourage the government to allocate more time and resources to the excavations. In July, Minister of the Environment Alex Attwood visited the dig and declared a “no go” zone around the crannog, limiting construction activity at the site. He later extended the excavation’s deadline until December, and then again until March 2013, giving Bermingham and her team time to explore the settlement fully. 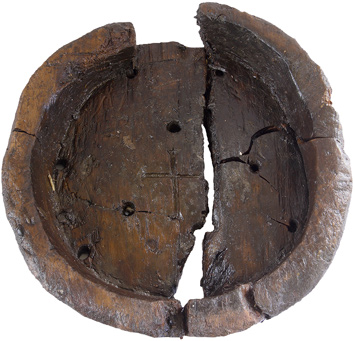 Bermingham will use copious environmental samples to reconstruct what conditions were like for the families that lived on the crannog. “We know their houses were damp and dank places,” she says, “but we want to get much more detail, to the level of what parasites were bugging them and what the microenvironmental differences were between the different buildings.” Amid the remains, the team has recovered more than 4,000 objects, including leather shoes, gaming pieces, delicate combs, and Bermingham’s favorite artifact: a wooden cheese mold with a cross incised on the bottom. “The quantity of material means we’re able to seriously review how early medieval Irish society functioned,” says Bermingham. “We can also compare our archaeological evidence with documentary sources such as the Annals of Ulster and the Lives of Irish Saints.” Some of the same medieval records could eventually give researchers the family name of the Drumclay crannog clan.

In the aftermath of what many regarded as a crisis, Attwood has asked University of Dublin archaeologist Gabriel Cooney to review the circumstances that almost resulted in the loss of one of the region’s most important sites and to make recommendations for changes in how the government handles archaeological investigations in advance of road construction. “Drumclay crannog is a very important site in and of itself,” says blogger Robert Chappelle, “but its longer-term value may be to help change how we do archaeology in Northern Ireland.”