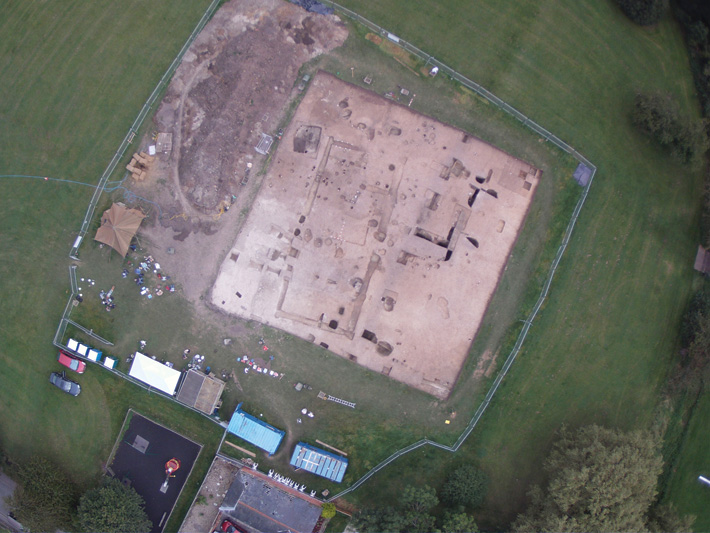 Fifth-century Britain was a tumultuous place, wracked by violence, upheaval, and uncertainty. The Roman Empire was crumbling throughout western Europe as waves of barbarian invaders overran its borders. By A.D. 410, groups of Angles, Saxons, and Jutes began crossing the North Sea from Germany and southern Scandinavia to claim land in Britain that had been abandoned by the Roman army. These tribes succeeded Rome as the dominant power in central and southern Britain, marking the beginning of what we now call the Anglo-Saxon Age, which would last for more than 600 years.

While the story of this period is known to us in broad strokes, in archaeological terms, there remains much to uncover. The early Anglo-Saxon period is a time whose events are often shrouded in fantasy. This fantastical view can be traced to later, Christian writers who described the pagan world of the fifth and sixth centuries as being inhabited by wizards, warriors, demons, and dragons. Legendary tales, passed down, were often the subject of later Old English works of poetry. Perhaps the most famous of all is the epic work Beowulf, whose eponymous hero battles monsters and fire-breathing dragons. But some of the details of early Anglo-Saxon life that have been gleaned piecemeal from texts are now being confirmed by archaeology. Such is the case with the recent surprising discovery of a Saxon royal feasting hall.

For the last six years the Lyminge Archaeological Project has investigated the modern village of Lyminge, Kent, located a short distance from the famous white cliffs of Dover. Researchers from both the University of Reading and the Kent Archaeological Society are documenting Lyminge’s transition from a pagan royal “vill” into a significant Christian monastic center. The settlement encompasses both the pre-Christian and later Christian Anglo-Saxon periods and is proving valuable in understanding the development of early English communities. According to Alexandra Knox, archaeologist and Lyminge Archaeological Project research assistant, the work there is supplying a key piece of the puzzle. “The history of the Christian conversion in Kent,” Knox says, “the historically earliest kingdom to be converted in the Anglo-Saxon period, is integral to our understanding of the creation of medieval and, indeed, modern England.”

The Christian Anglo-Saxon community in Lyminge founded an important “double” monastery—home to both monks and nuns—dating from the seventh to ninth century. The existence of this monastery has been known from at least the middle of the nineteenth century, when Canon Jenkins, a local vicar and amateur archaeologist, discovered the remains of the ancient monastic complex. But apart from these Christian ruins, little was known about Lyminge’s earlier history.

During the dark and violent times of the fifth century, pagan warrior kings ruled southern Britain. At Lyminge, current archaeological research is now making it possible to retrace the village’s early history to Anglo-Saxon settlers, just a few decades after the fall of Roman Britain. The recently discovered Anglo-Saxon hall, which researchers believe dates to about 600, would have been an essential feature of any important early Saxon settlement. In Old English poetry the hall is often the scene of royal feasts and banquets. In the story of Beowulf, the hero is tasked with slaying the monster Grendel, who has been terrorizing the famous hall of Heorot. 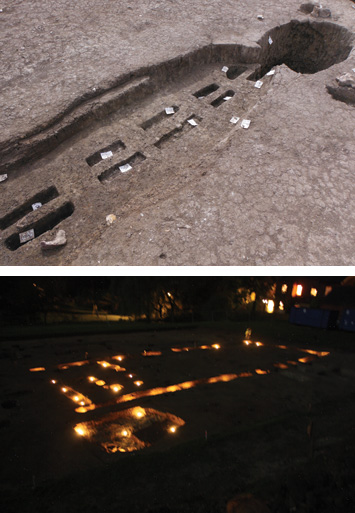 The royal feasting hall in Lyminge remained undisturbed for nearly 1,400 years, just a few inches below the surface of a village green that lies at the center of the modern town, and within view of the monastery site. It is the first of its kind to be discovered in England in more than 30 years. “Excavating large open areas in villages of medieval origin can be an extremely successful strategy in uncovering the evolution of the Saxon village,” explains Knox. “No large building was visible on the geophysical survey, so it was a great surprise to the team to uncover the full floor plan of such a significant structure.”

Large royal halls such as the one found in Lyminge are known to be associated with local elites and played a central role in early Anglo-Saxon society. The king and his guests would gather to socialize, celebrate victories, or listen to performances. The hall not only hosted legendary feasting parties, sometimes lasting days, but was also a key multipurpose assembly space for early Saxon communities. These halls were the site of essential political, social, religious, and legal activities. Since the feasting hall at Lyminge was constructed from timber and other perishable materials, only the foundation trenches and postholes remain visible. Its rectangular plan measures approximately 69 by 28 feet, making it comparable to the grandest Saxon halls ever discovered, such as those at Yeavering in Northumberland and Cowdery’s Down in Hampshire.

While halls of this type have generally yielded very few significant artifacts, in the case of Lyminge, archaeologists found one important object—an exquisite gilt copper-alloy horse-harness mount was discovered in one of the wall trenches. The quality of its design, style, and craftsmanship indicate that it most likely belonged to an important Anglo-Saxon warrior, adding archaeological support to the stuff of legends. According to Knox, “This artifact is a direct link to the warrior ideal embodied in Beowulf.” Artifacts such as these are often seen in horse and warrior burials of the fifth and sixth centuries. “The Anglo-Saxon hall,” Knox adds, “provides clear evidence that elite individuals, most likely the kings of Kent, were staying at Lyminge in the pre-Christian period.” 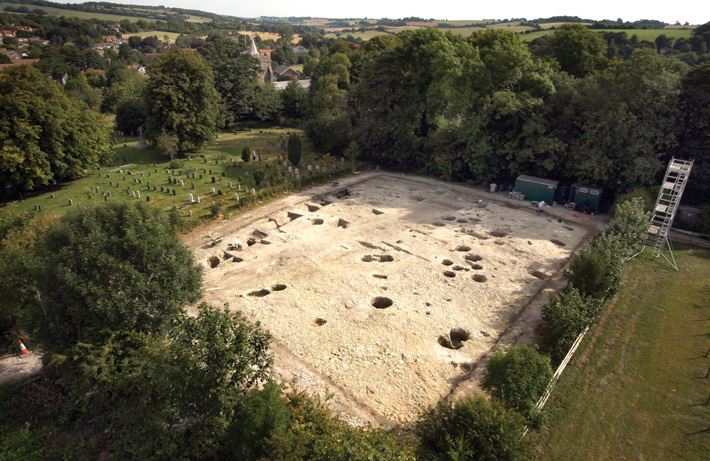 The days of the pagan Anglo-Saxon kings were to be short-lived. After only one or two generations, the settlement that took the royal hall as its symbolic center was abandoned. In another part of Lyminge, on a spur of land above the old pagan village, a new community formed, this time concentrated around a newly built Christian monastery. 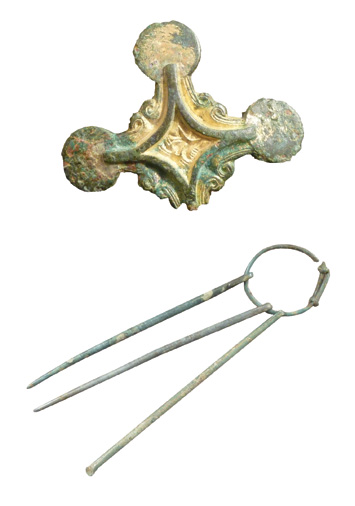 The monastery at Lyminge has old and storied connections to the earliest Christian Anglo-Saxons. While the populations of Roman Britain had already converted to Christianity following the conversion of the Roman emperor Constantine in 312, the foreign tribes who invaded the island after the Roman collapse were pagans. St. Augustine of Canterbury was commissioned by Pope Gregory to travel to Britain to reestablish Christianity there and to convert the pagan Saxon communities. Shortly after his pilgrimage in the sixth century, the monastery in Lyminge was founded by Queen Æethelburga, daughter of King Æthelbert of Kent, who, in 597, became the first Anglo-Saxon king to be converted to Christianity.

Lyminge was transformed by its Christian monastic settlement, which brought about changes in lifestyle, identity, and behavior of the local population. Recent excavations have revealed a large granary and an industrial-sized ironworking facility that attest to the growth of Lyminge’s economy. The presence of fish bones and other marine evidence shows that the monastic community was connected to broader trade networks and was capable of exploiting coastal resources. This also indicates the impact that Christianity had on diet, as fish became a much more significant staple in the eighth and ninth centuries.

The transition from the Roman Age to the Anglo-Saxon Age in this part of Britain can be understood as a two-part process. The first was characterized by the dominance of pagan warrior kings and the second by the reestablishment of Christianity. The last days of the pagan Saxon kings and the great feasting halls of the age of Beowulf gave way to an era that would be even more influential in the construction of the modern English identity. All is finally visible in the village of Lyminge.

Jason Urbanus has a Ph.D. in archaeology from Brown University. 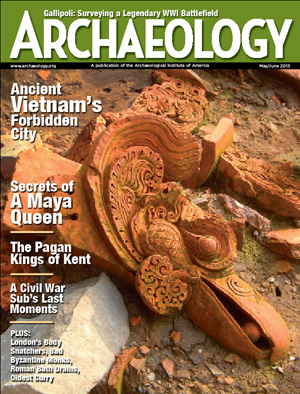 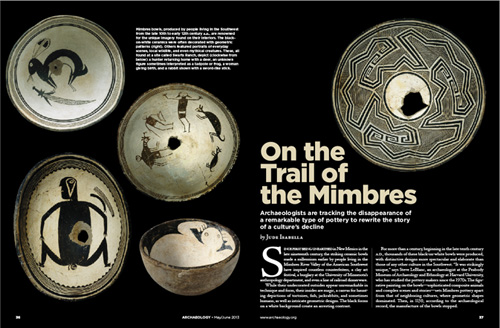