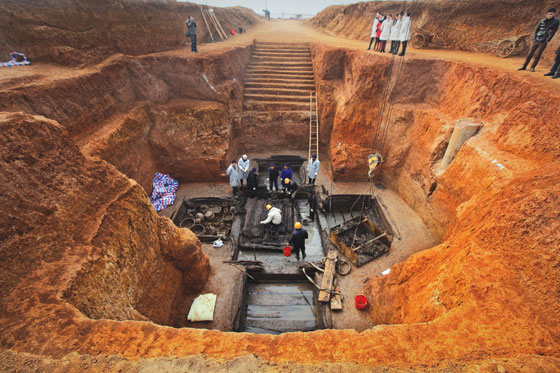 Over the past three years, archaeologists working at an ancient necropolis outside the city of Suizhou in southern China’s Sichuan Province have excavated 65 tombs. But according to excavation director Huang Fengchun of the Hubei Provincial Institute of Cultural Relics and Archaeology, tomb 18 in particular is “quite special.” The shape of the tomb resembles the ancient form of the Chinese character “Ya,” which means “second” or “inferior.” The quality of the grave goods found in the tomb, including numerous precious bronze vessels, indicates it likely belonged to a state official of the eastern Zhou Dynasty (770–256 B.C.). But exactly what or whom he was second or inferior to is unknown. Perhaps the answer lies in a 66th tomb.