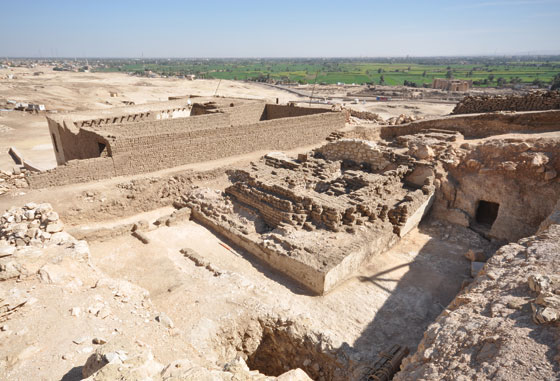 Belgian archaeologists recently uncovered a mudbrick structure on a hill at Thebes (modern Luxor) that is actually the base of a pyramid erected for a top minister of 19th Dynasty pharaoh Ramesses II, who ruled Egypt from 1279 to 1213 B.C. Bricks from it are stamped with a rectangular hieroglyphic inscription,“Osiris, the vizier of Upper and Lower Egypt, Khay.” The minister, Khay, who is buried in a tomb beneath the pyramid, can be seen in the structure’s capstone, which pays respect to Re-Horakhty, a combination of the sun god Re and sky god Horus. The pyramid would have measured 40 feet along each side, stood roughly 50 feet tall, and overlooked Ramesses II’s funerary temple.

Multiple waves of settlements helped keep the pyramid hidden. Laurent Bavay, an archaeologist at the Université libre de Bruxelles, notes that parts of the monument were used to construct Coptic hermitages atop the site more than 1,300 years ago. Then, in the nineteeenth century, Egyptians arrived at the Theban necropolis to hunt for antiquities they could sell to Europeans. “They literally settled on the tombs to plunder them, systematically,” he explains. The exact location of Khay’s tomb is under one of the remaining local residences, to which the archaeologists do not currently have access.