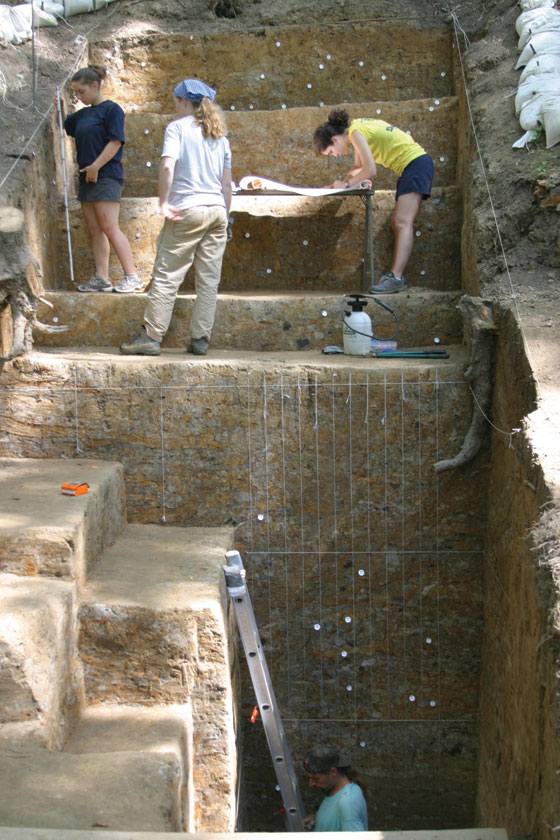 Around 3,200 years ago, hunter-gathers in what is now northern Louisiana managed to construct a series of massive earthworks. Known as Poverty Point, the elaborate site consists of six concentric, arc-shaped ridges surrounded by a number of mounds. The tallest of them, Mound A, now rises 70 feet and seems to be shaped like a bird. Given that a total of one million cubic yards of earth were used to build them, archaeologists have long assumed that the mounds at Poverty Point were built gradually over the course of hundreds of years by successive generations of small bands that came together to celebrate religious rites. But now, Murray State University archaeologist Anthony Ortmann and his colleague Tristram Kidder of Washington University in St. Louis say that while Mound A wasn’t built in a day, it went up in the blink of an eye in archaeological time.

After analyzing the earth that makes up Mound A, the two found no evidence for erosion, which would be expected if the mound were built over the course of centuries. In fact, based on their analysis of the soil, the archaeologists estimate the mound was built in 90 days, or even fewer, and that it took at least 3,000 laborers to construct it. Scholars have long assumed that hunter-gatherers, who had no formal leaders, were so focused on mere survival that they were not capable of quickly building monuments on the scale of Poverty Point. “According to our old model they lacked the organizational abilities,” says Ortmann. “That’s too simplistic, but just how they brought all those people together is still a perplexing question.”