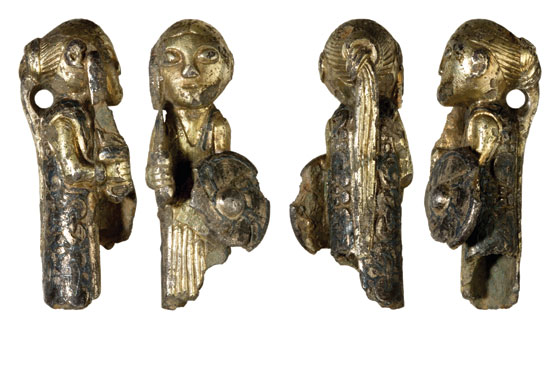 When amateur archaeologist and metal detectorist Morten Skovsby uncovered this tiny silver figurine near the village of Hårby in the southwest part of the Danish island of Funen, he knew exactly what to do. He documented the findspot immediately, and then took the artifact to the City Museum in nearby Odense. When the museum’s curator, Mogens Bo Henriksen, saw the figurine, he knew what it was. “There can hardly be any doubt,” he says, “that this depicts one of Odin’s valkyries.”

Norse myths, called sagas, tell of female figures called valkyries (from the Old Norse valkyrja meaning “chooser of the slain”). The valkyries were sent to battlefields by the god Odin to select which fallen warriors were worthy of afterlives in Valhalla, filled with feasts of wild boar and liquor milked from goats. Despite their prevalence in the sagas, depictions of valkyries are relatively rare. They are confined to Swedish picture stones dating to about A.D. 700 and a handful of Early Viking fibulae (brooches) from Sweden and Denmark. So this three-dimensional representation is unique.

The figurine, which would probably have been a pendant, is partly gilded, while other areas are colored black by niello, a mixture of copper, silver, and lead sulphides used as an inlay. The valkyrie wears a long patterned dress and carries a double-edged Viking sword in her right hand and a shield protecting her body in her left. Dating to about A.D. 800, the figurine was recovered near an excavated area known to have been a metal workshop. Perhaps, says Henriksen, it was discarded as waste. Or maybe it was raw material on the way to the melting pot. “For some unknown reason it didn’t make it that far—and that’s our good luck,” he adds.