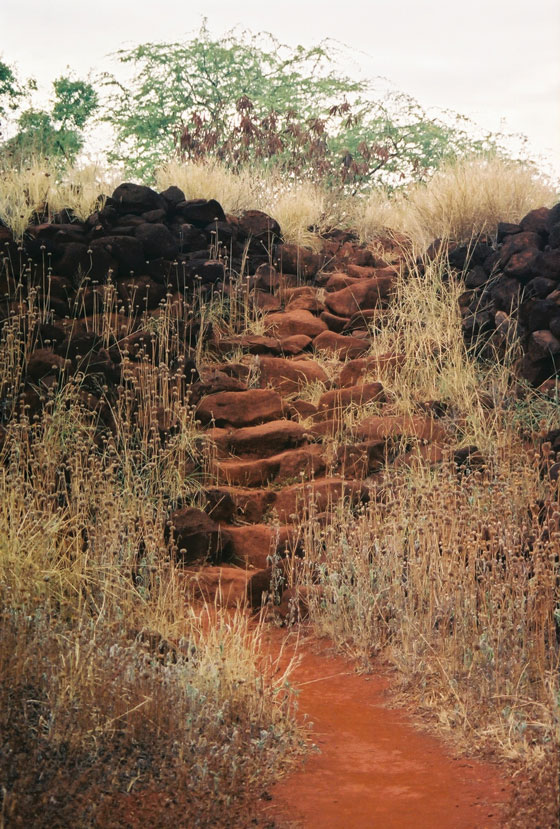 In 1816, Georg Anton Schäffer, a German doctor working for the Russian-American Company, arrived in Hawaii to retrieve company cargo being held by Kaumualii, chief of the island of Kauai. Kaumualii, angling for Russian support to break free from the influence of King Kamehameha (whose kingdom nominally encompassed all the islands), convinced Schäffer that the Russians could capture the entire island chain, and gained Schäffer’s assistance in building a fort on the western side of the island, near Waimea, and two others on the northern side. Schäffer promised Kaumualii the czar’s support—but that support was not his to grant, and a year later Kaumualii forced Schäffer to leave. The Waimea fort, now commonly known as Russian Fort Elizabeth, eventually came under the control of Kamehameha supporters, and years later was used to put down a rebellion by Kaumualii’s son, George “Prince” Humehume. Archaeologist Peter Mills of the University of Hawaii at Hilo says that though Schäffer gave the fort a Western name (for the Empress of Russia at the time), Hawaiians had their own names for it, and built it as an extension of Kaumualii’s residential compound. Its construction recalls Hawaiian-built structures, such as places of worship called heiau.

The site
Russian Fort Elizabeth, a state historical park and a U.S. National Historic Landmark, is situated on the edge of the Waimea River, very close to the Pacific Ocean. A small parking lot off the Kaumualii Highway features a sign with the history of the site and a map of walking trails. Its stacked-stone walls are more than 10 feet thick and enclose one and a half acres. Though it can be difficult to see from ground level, the fort has a star-shaped design typical of European forts of the time but unusual for a Russian colonial structure. While Russian forts were often built of wood, which was available on Kauai, historical accounts of the fort’s construction and stonework leads Mills to infer that it was built not by Russians, but by Hawaiians directed by Kaumualii following Schäffer’s plan. And though many still see the site as a “Russian fort,” it was staffed and guarded exclusively by locals. The site demonstrates the complexities of interpreting multicultural sites from colonial periods, Mills says.

While you’re there
Russian Fort Elizabeth is on the west side of Kauai, which has both cultural sites and scenic wonders. Captain James Cook first landed in Hawaii at Waimea Bay in 1778, and a statue of him stands in Waimea to commemorate the event. The nearby town of Hanapepe is the art capital of Kauai, with many galleries, shops, and restaurants. Amazing views of Kauai’s natural splendor can be seen from Kokee State Park, and from a lookout point above Waimea Canyon, known as the “Grand Canyon of the Pacific.” It stretches 14 miles long, a mile wide, and more than 3,600 feet deep!