Perhaps it is surprising to find some of the Balkans’ great works of art in the tiny chapel of St. Premte in the remote central Albanian village of Valsh. But the stunning sixteenth-century frescoes were no surprise to the looters who tried to rip them off the walls in two separate attempts on December 30, 2012, and January 4, 2013, causing significant—and some irreversible—damage. Certainly even the partial destruction of any of a nation’s cultural heritage is disturbing. What makes the recent events even more distressing, however, according to Lorenc Bejko, a professor of archaeology and cultural heritage management at the University of Tirana, is that several of the frescoes were painted by Onufri, one of the most important artists of the post-Byzantine period in the southern Balkans.

Onufri was a founder of a school of religious art. He was also a leader of the revival of the style of sacred painting that had flourished two centuries before, during the reigns of the first emperors of the Byzantine Empire’s Palaiologos Dynasty. Although he was a prolific icon painter, and many examples of his icons survive, only a small number of his frescoes are still extant. In fact, in Albania, Onufri’s work can only be seen in Berat, a small city and World Heritage Site in the south-central part of the country, and at Valsh, where the artist resided for a time in the mid-sixteenth century. Other examples of Onufri’s paintings exist outside of modern Albania’s boundaries, at Kastoria in northern Greece and in the Republic of Macedonia. “This makes Onufri particularly important and his works of art, both frescoes and icons, are of special significance for the history of art in the sixteenth and seventeenth centuries,” says Bejko. 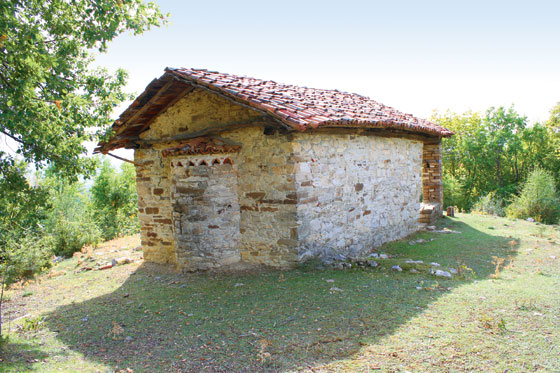 The thieves who came to Valsh this past winter attempted to remove the heads of the saints, but instead succeeded only in damaging the area around St. Ilia’s face and completely destroying the face of St. Premte. Currently the laboratory at the Institute for Cultural Monuments in Tirana is working to reassemble the fresco fragments collected after the attack and scholars there believe that about 30 percent of the figures can be restored. In the meantime, the thieves have not been caught, and Albania, like many countries with such diverse and substantial cultural heritage and without a great deal of funding, struggles to figure out how to protect its sites, museums, and artifacts. “The plundered church at Valsh represents a dramatic loss for the county’s heritage. It was unprecedented and brutal, shocking the conscience of public opinion,” says Bejko. “The local community lost an important resource of pride and income, and Albanian society lost a symbol of its artistic past.”