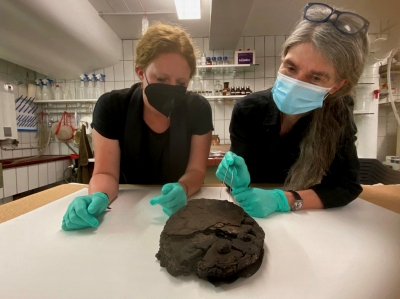 LÜBECK, GERMANY—A cake baked 79 years ago has been found in the Old Town district of the city of Lübeck, which is located near the coast of northern Germany, according to a Live Science report. Dirk Rieger of the Hanseatic City of Lübeck Historic Monuments Protection Authority said that the city, although a non-military target, was bombed by the British Royal Air Force on the night of March 28, 1942, in retaliation for the Nazi blitz of Coventry, England, in 1940. The cake was found in the remains of a building that collapsed into its cellar during the air raid. Later, a new house was built on top of the ruins. Wrapped in wax paper, the hazelnut and almond cake decorated with sugar icing was carbonized and preserved, Rieger explained. Plates, knives, spoons, and vinyl records, including a recording of Beethoven’s Moonlight Sonata, were found nearby. “Because this was a family celebration, they listened to music, they wanted to have a nice cup of tea, they wanted to have this cake,” he said. “It’s a very intimate situation that was immediately destroyed by this war.” To read about a 106-year-old fruitcake found on Antarctica's Cape Adare, go to "Super Fruitcake," one of ARCHAEOLOGY's Top 10 Discoveries of 2017.