How Native Americans Mapped Their Religion 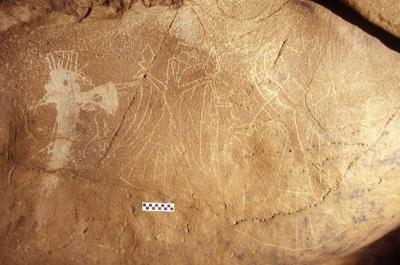 KNOXVILLE, TENNESSEE—An analysis of 50 cave art and 44 outdoor art sites in the southern section of the Appalachian Mountains indicates that, more than 6,000 years ago, Native Americans were mapping the cosmological universe onto the physical landscape around them. The tiered system had at its highest elevations depictions of heavenly bodies and weather phenomenon, at its middle section images of nature, and at its lower reaches drawings associated with death and renewal. "This layered universe was a stage for a variety of actors that included heroes, monsters and creatures that could cross between the levels," said University of Tennessee, Knoxville, anthropologist Jan Simek.