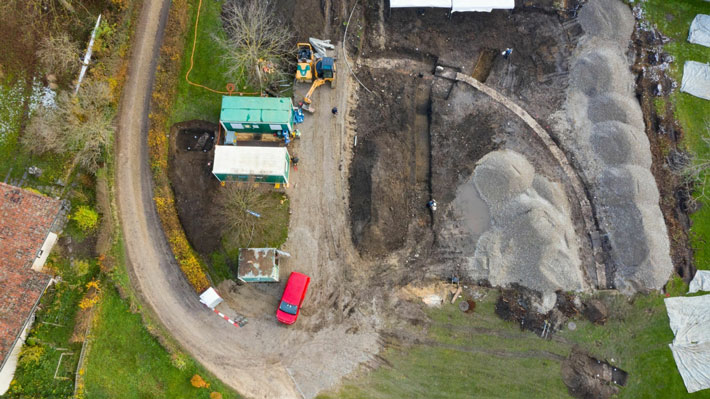 KAISERAUGST, SWITZERLAND—Live Science reports that a Roman amphitheater was discovered in northwestern Switzerland by a team of researchers led by archaeologist Jakob Baerlocher, who were investigating the area ahead of a construction project along the Rhine River. The amphitheater, one of three found in the region, was located near Castrum Rauracense, a fort built on the Roman Empire’s northern border in A.D. 300. The structure has been dated to the fourth century A.D., based upon construction techniques and its placement in a quarry known to have been in use until late antiquity. A coin dated to between 337 and 341 was also found at the site, Baerlocher explained. The oval structure measured about 164 feet long and 131 feet wide. Evidence suggests its interior walls were plastered, and postholes in the soil from wooden grandstands were also found. A large gate flanked by two entrances was unearthed to the south, and to the west, sandstone blocks for another entrance were uncovered. To read about another Roman amphitheater that was recently unearthed in Turkey's ancient city of Mastaura, go to "In the Anatolian Arena."