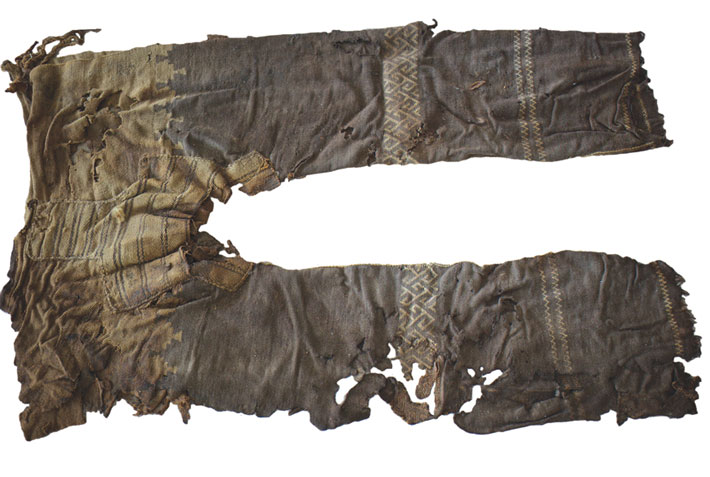 TURFAN, CHINA—Science News reports that an international team of archaeologists, fashion designers, geoscientists, chemists, and conservators led by Mayke Wagner of the German Archaeological Institute has analyzed a 3,000-year-old pair of trousers discovered in a grave in Yanghai cemetery, which is located in northwestern China’s Tarim Basin. The study suggests that the trousers were crafted from yarn made from coarse wool with a combination of three weaving techniques. An elastic twill weave was used in much of the garment. Variations in the weft threads of the twill weave created brown stripes over the crotch piece. Zigzag stripes were also woven into the ankle and calf areas of the trousers. Tapestry weaving with twisted threads in different colors was used to reinforce the geometric patterned–fabric covering the knees, while a third technique was used to create the thick waistband. The researchers suggest that the variety of weaving techniques and patterns may have come together as herders following seasonal migration routes crossed paths in the Tarim Basin. “A diversity of textile techniques and patterns of different local origins, traditions, and times merged into something new in this garment,” Wagner explained. For more, go to "World's Oldest Pants."