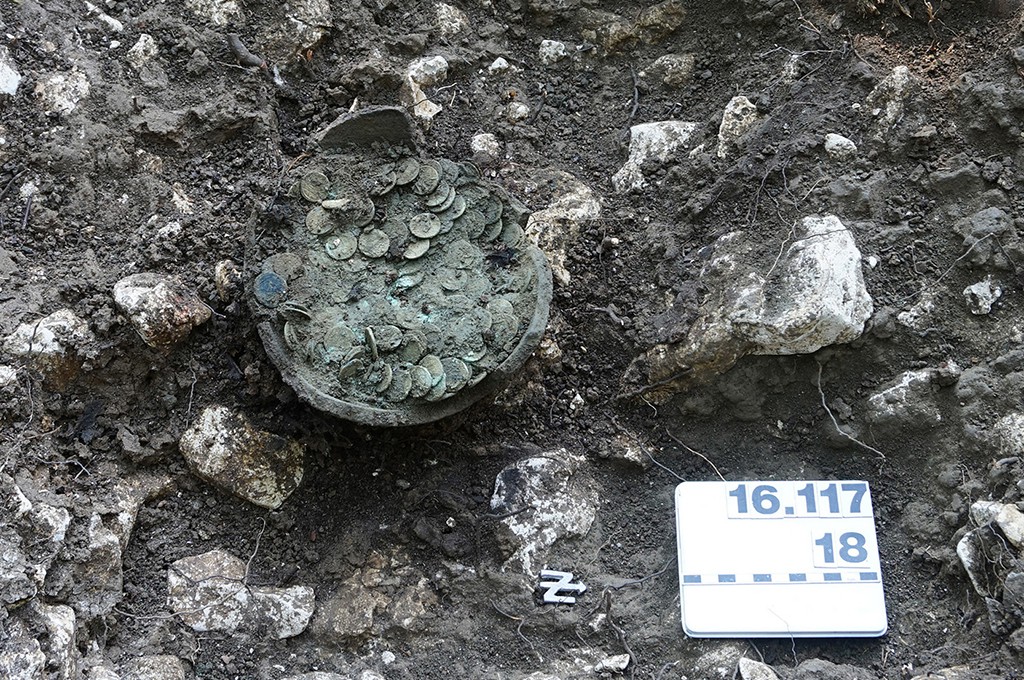 BASEL-LANDSCHAFT, SWITZERLAND—Live Science reports that a nine-inch-tall clay pot filled with more than 1,200 Roman coins was discovered in northern Switzerland by a metal detectorist who alerted Archaeology Baselland, the canton’s archaeological department. Reto Marti, head of the department, and his colleagues were able to remove the pot in a block of soil and send it for a CT scan, which revealed a piece of cowhide dividing the coins into two piles within the pot. All of the coins were minted during the reign of the emperor Constantine (A.D. 306–337), when the area where the coin hoard was found once bordered three Roman estates. “There are two types of coins in the pot, but the exact denomination of these late antique bronze coins is not known,” Marti said. Coins were usually buried in times of distress in order to protect them, Marti explained, but these coins, worth about two months of a soldier’s salary, appear to have been buried between A.D. 330 and 340—a time of relative peace and economic recovery. The coin cache may have been buried as an offering to the gods, or it may have had something to do with the boundary, he added. Study of the coins will help researchers understand the use of money and circulation of coins during Constantine’s rule, Marti concluded. To read about a clump of coins of Constantine found underwater in Caesarea, go to "Sun and Moon."