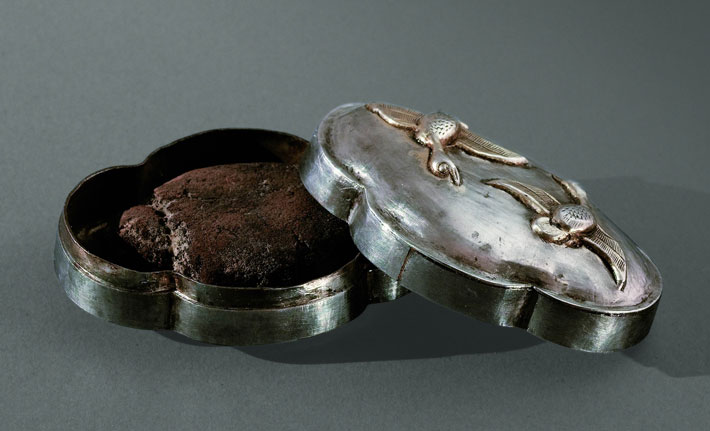 SHAANXI PROVINCE, CHINA—The South China Morning Post reports that researchers identified rare remnants of incense in three containers dating to the Tang Dynasty (A.D. 618–907) that were recovered from the underground palace of the Famen Royal Temple in northwestern China. The temple was known for housing an important sarira, or relic––the finger bone of Sakyamuni Buddha, which historical documents record was worshipped by Tang emperors. Incense was a common element of Buddhist rituals and would have been used during royal ceremonies venerating the sarira. Using chemical analysis, the researchers determined that one of the vessels contained fragrant agarwood and another elemi resin. A third, begonia-shaped silver container held a mixture of agarwood and frankincense. "The incense samples were mainly from abroad and transported to China through the land or maritime Silk Road," said Yimin Yang of the University of Chinese Academy of Sciences. "[The findings] reflect the incense trade and its function in Buddhist activities during the Tang dynasty." To read about Tang murals recently uncovered in a tomb in Shaanxi Province, go to "Beast Masters."