Has the Ancient City of Natounia Been Found in Iraq? 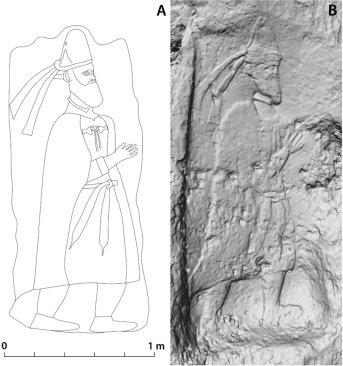 KURDISTAN, IRAQ—According to a CNN report, traces of a 2,000-year-old stone fortress, two settlements, and a religious complex found in the Zagros Mountains in northern Iraq may be the ancient city of Natounia. Michael Brown of Heidelberg University and his colleagues said the site, known as Rabana-Merquly, is located on the ancient border of Adiabene, a minor kingdom that paid tribute to the Parthian Empire. Rock carvings found at the entrance to the fortress are thought to depict a king of Adiabene, based upon the clothing and hat worn by the figure. A similar carving has been found in the ancient city of Hatra, located about 140 miles away. “Natounia is only really known from its rare coins, there are not any detailed historical references,” Brown explained. Information from the seven known coins provide the name of the king Natounissar, and a location on what is now known as the Lower Zab River. Brown noted that some high-status tombs were also found near the fortress. “It’s a circumstantial argument,” he explained. “Rabana-Merquly is not the only possibility for Natounia, but arguably the best candidate by far [for] the ‘lost’ city, which has to be in the region somewhere,” he concluded. To read in depth about a Bronze Age Iranian settlement known as “Burnt City,” go to “The World In Between.”