Temple Dedicated to the Sun God Unearthed in Egypt 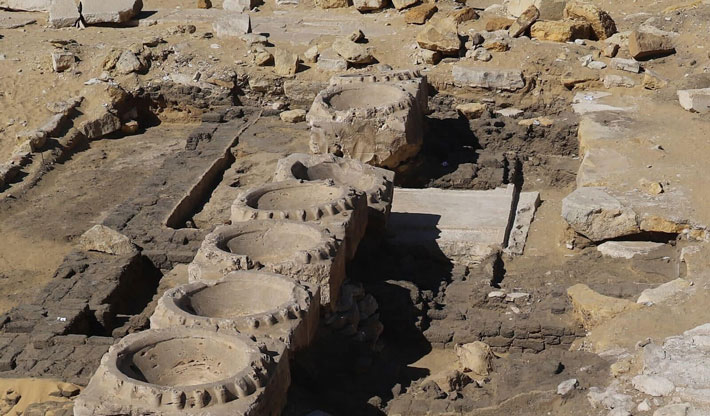 CAIRO, EGYPT—According to a Live Science report, 4,500-year-old traces of a temple dedicated to Ra, the ancient Egyptian sun god, have been uncovered south of Cairo at the site of Abu Ghurab by a team of researchers led by Massimiliano Nuzzolo of the Polish Academy of Sciences and Rosanna Pirelli of the University of Naples L'Orientale. The mudbrick structure, thought to have been built during the reign of either Shepseskare, who ruled from about 2438 to 2431 B.C., or Neferefre, who ruled from about 2431 to 2420 B.C., measured at least 197 feet long and 66 feet wide. It consisted of an L-shaped entrance portico featuring limestone columns, a courtyard, storage rooms, and rooms thought to have been used for unknown cultic purposes, Nuzzolo explained. “The walls of this building were all plastered in black and white and often also show traces of painting in red and blue,” he said. One deposit of artifacts included dozens of beer jars and jars decorated with red pigment, while a second deposit contained the seals of pharaohs from the 5th and 6th Dynasties. The temple was ritually demolished, Nuzzolo added, possibly before it was completed. A new temple was built of stone at the site for Niuserre, who reigned from 2420 to 2389 B.C. To read more about the 5th Dynasty pharaohs, go to "In the Reign of the Sun Kings."