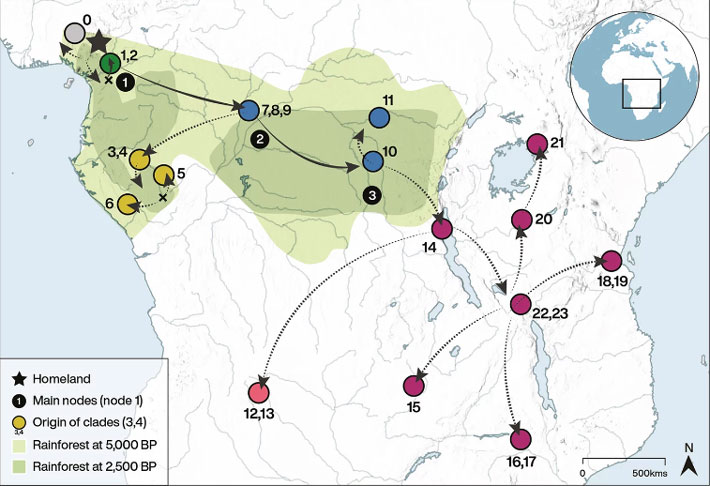 MUNICH, GERMANY—According to a statement released by the Max Planck Society, a team of researchers led by Ezequiel Koile analyzed more than 400 Bantu and related languages with a sequence-free sampling approach, which was borrowed from a process used in genetic studies, in order to track how Bantu speakers spread southward through the Central African Rainforest from a region near the current border of Nigeria and Cameroon. The team members also used a “breakaway model” when assembling the language family tree. In this scenario, at every split in the language tree, one of the populations stayed in the same place, while the other migrated, explained team member Remco Bouckaert. This seemed to be a more realistic possibility than other diffusion-based methods, he continued. The study concluded that the Bantu expansion occurred about 4,000 years ago—long before a savanna corridor alongside the rainforest is thought to have opened up around 2,500 years ago. It had been previously thought that Bantu populations would not have been able to maintain their crops and cattle while migrating through dense rain forest. Read the original scholarly article about this research in Proceedings of the National Academy of Sciences of the United States of America. To read about DNA analysis of an enslaved individual who was likely from a Bantu-speaking population, go to "Tracing Slave Origins," one of ARCHAEOLOGY's Top 10 Discoveries of 2015.